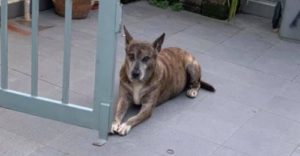 On April 16, Johnny the stray lost his best friend in the world. But the love and kindness that existed between the two lives on.

From the beginning, the two had seemed a pair. When the stray first showed up in the neighborhood, Nurul Ain and her father named him Johnny and began leaving him food.

“A few years ago, this dog appeared in front of our house. At first we were just feeding him because he was so thin,” she tweeted, “but after a while, he just kept sitting outside the house, guarding the house, but never going further than the gate.”

It was only after Johnny appeared one day, bloodied and limping, that he entered their home. Her father sought the help of his neighbors so that he could take Johnny to the vet. After that, Nurul says, the relationship between Johnny and her father only grew.

“Dad was always the one feeding him, taking care of him like a child,” she tweeted. “Any time we go out to eat, he would return with chicken bones for Johnny. If we didn’t have enough, he would go as far as asking the people nearby for their chicken bones.”

She continued, “Some people said that what my dad was doing (picking up bones from strangers) is embarrassing, but my dad was never bothered about it. All he had in mind is to feed Johnny. My dad even trained it to behave, and sit quietly before its meals.”

But when her father passed away, there was suddenly a void in Johnny’s life.

“That night when he (Johnny) was making noise for food, he realized that dad was no longer there,” she tweeted.

Nurul stepped up to take care of Johnny. She knew it’s what her father would have wanted.

“Johnny has eaten already, don’t worry dad,” she tweeted. “Even without you, we will make sure he always has food and water.”

The post Daughter Carries on Love Late Father Had for Stray Dog appeared first on iHeartDogs.com.