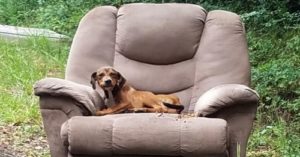 Sharon Norton is an Animal Control officer in Brookhaven, Mississippi. Despite the nature of her job, she is still shocked by some of the heartless acts she witnesses.

Her recent rescue of an abandoned puppy cowering in a broken armchair certainly fits that bill. Norton took to Facebook to express her feelings towards the pup’s former owner.

“To the person that dumped this chair, your puppy was waiting for you to come back, slowly starving to death because it was afraid to leave the chair to find food. Shame on you for doing this to this puppy…but one day Karma will meet up with you.”

A Good Samaritan contacted Brookhaven Animal Control after witnessing a truck drop off the chair, a television, and the frightened, malnourished puppy.

Norton earned his trust with a handful of treats and brought him to the Brookhaven Animal Rescue League where he is receiving veterinary care (and lots of love).

She named him “Lazy Boy Gaston” aka “the Armchair Bandit” because he’s stealing hearts everywhere!

Little Gaston will be available for adoption once cleared by veterinary staff. For updates, follow the Brookhaven Animal Rescue League on Facebook.

H/T to Fox19 and Fox32
Featured Image via Sharon Norton