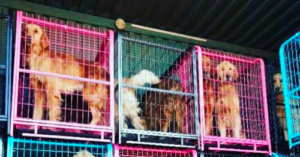 Consider this scary statistic…according to the rescue group Retrieve a Golden of the Midwest (RAGOM), an estimated 10 million dogs are slaughtered and consumed every year in China. Even more frightening, the majority of the murdered dogs were pets stolen from their homes or retired breeding dogs. Thankfully, volunteers and rescuers are fighting back.

A RAGOM board member named Nicole Stundzia could hardly believe her eyes when she visited China to bring some Goldens to the United States. She traveled to China to connect with local rescuers and offer them a safe place to relocate the dogs.

Stundzia found out it’s quite easy for bad actors to kidnap dogs in China. She told Kare 11, “I learned while I was over there, they don’t walk dogs on leashes. So it’s very easy for somebody to jump out of a truck, grab a dog, jump in, and drive off.”

Once they save dogs from these trucks, animal care workers take them to shelters. Unfortunately, those shelters are often overcrowded. Stundzia described the shelter she visited, “It was a hundred dogs at least, and they were just all starving for human attention. Jumping on gates, they wanted you to pet them.”

At the shelter, one particular pup stood out to Stundzia.”I’d walk up to her kennel and she’d sit so pretty for attention, it was hard to walk away. There was something in her eyes. It was just so sad, so I took her picture.”

So she decided to do something for this pup in need.

The dog’s shelter name was #6894. But Stundzia saw something other than a number. She called her Mama. “There was a mama who I could see had recently had puppies. She had such sadness in her eyes. She would sit politely to greet you. It was as if she was hoping if she sat pretty enough she’d be picked.”

However, Stundiza had already committed to a certain number of dogs to bring home and Mama was not in that group. So, she appealed to the generous RAGOM community for help.

“[The] RAGOM village kind of rallied together and a volunteer was kind enough to go over there with her husband and daughter and they were able to bring Mama back with four others. It’s unbelievable to me that she made it back there.”

Now, a few months later, Mama lives with a foster family in Minnesota. Stundzia is relieved this pup will find a loving forever home. Even more, she’s thrilled with the results of her travels to China.

“It’s rewarding, part of being the pre-adoption team, it’s so, so fun to see these families so excited to adopt dogs that I had a part in bringing back over,” she said.

Mama will be available soon for adoption. Follow her story on RAGOM’s website. You can watch the moving story below.