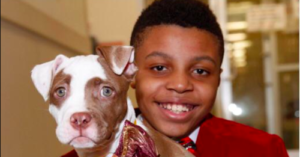 When we heard about this 12-year-old boy’s “PAW-some” mission we couldn’t help but smile. A budding fashion designer from New Jersey dedicates his time to crafting stylish accessories for shelter dogs to help them get noticed. Talk about generous and giving!

Sir Darius (aka Darius) developed a love for fashion at a young age. When he was eight, he helped his sister cut fabric to develop and improve his fine motor skills. Soon a passion formed. Darius became interested in making bowties.

A few years later, Sir Darius learned how his passion could benefit dogs in need. In 2017,  he wanted to help homeless animals displaced by Hurricanes Harvey and Irma. After he learned some rescue dogs were transferred from the devastation in Texas and Puerto Rico to the ASPCA in New York City, he decided to donate bow ties to these pups. The goal was to help them look attractive in the hope of getting adopted faster.

Darius told the New York Post, “These dogs need to be adopted, and I wanna help them get noticed.”

When Sir Darius learned that some dogs face a truly dismal fate, he wanted to do all he could to help them find forever homes. He donated many bow ties to animal shelters and adoption centers across the US and in the United Kingdom.

His story of compassion and kindness garnered the attention of many. According to Sir Darius’ Go Fund Me page: “Former President Barack Obama learned of Sir Darius and his mission, sending him a letter of recognition for his compassion, efforts, achievements and his commitment to service.” Truly impressive!

He has more than 43,000 followers on Instagram. He received recognition from former NBA All-Star Allen Houston, Michael Strahan, Walt Frazier, Scott Perry, The New York Knicks, and The New York Giants. His story appeared on many news outlets and televisions shows.

This summer Darius wants to further extend his philanthropic mission. He started a virtual fundraiser so he can help more animals in need. This is his summer goal:

…to visit 5+ states to volunteer at different shelters and adoption centers assisting with the care of their shelter dogs, helping with adoption events as well as getting them cute and dapper in his snazzy bow ties in hopes of getting as many dogs as he can adopted this summer.

What an inspirational young man! Get to know Sir Darius better and watch his appearance on The Rachel Ray Show below.

The post See How This 12-Year-Old Is Helping Shelter Dogs Find Homes In the Classiest Way appeared first on iHeartDogs.com.