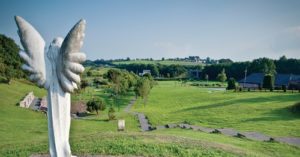 Hilary Hughes lost her beloved dog Patsy earlier this year. Patsy’s remains were laid to rest at Brynford Pet Cemetery, and she was memorialized with a sweet memorial headstone. Wanting to be near Patsy for all eternity, Hughes made a special request of her family. When she died, she wished to have her remains interned alongside Patsy.

Hilary passed away in May at the age of 79 and her husband, Gethin Hughes, made sure her wish was fulfilled. He contacted the owner of Brynford Pet Cemetery and was given confirmation that the burial could take place. After receiving Hilary’s cremated remains, Brynford buried them and added Hilary’s information to the shared headstone.

Apparently the practice of being interned with your dog is becoming increasingly popular in the UK. Brynford Pet Cemetery has about 60 people interned with their pets in total. Owner and managing director John Ward told the Daily Post UK,

“It all began around 25 years ago when one woman came to us after her dog and her husband had both passed away. It was her husband’s wishes to be buried with their dog but when the human crematorium refused, she came to us and we have been doing it ever since. People from incredible bonds with their pets that last forever, they find comfort joining them here.”

In addition to beautiful grounds, where visiting people and dogs are welcome to walk freely, the cemetery is planning a memorial for military dogs who have given their lives in service to the country. Four bronze statues of dogs will be erected to honor all of the military working dogs who have bravely served from World War I to present day and beyond.

The post Together Forever: Woman Laid to Rest Alongside Beloved Dog appeared first on iHeartDogs.com.