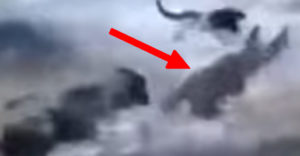 You can almost hear the music in the background. Dun dun…dun dun! Thank you Steven Spielberg for terrifying beachgoers throughout the years with the 1970’s hit Jaws. Seeing a shark near the shore would be so frightening, you wouldn’t want to be anywhere near the water. But for these lucky pups, a close encounter with an apex predator ended with the feisty fish turning tail and swimming for open water. Dogs -1. Shark – 0.

While splashing around in the brisk, blue waters, a pack of canine companions were enjoying a cool play day in the surf. But this was not “just another day in paradise.” As beachgoers watched on, one started filming as he noticed something strange in the water. A shark fin. Before we go on, we’re right there with you. Put the camera down and help the dogs out of the water. Come on! Fortunately, the dogs weren’t the ones who needed rescue.

NOTE: We know the video/images aren’t the greatest quality. Apparently, someone is still using a flip phone circa 1990 to shoot this video. But it’s pretty amazing to witness these dogs looking out for one another, so we wanted to share it.

The dogs are seen here splashing around, enjoying the water. Just to the right of them, a 5-foot shark approaches, looking to investigate the sounds of splashing water. 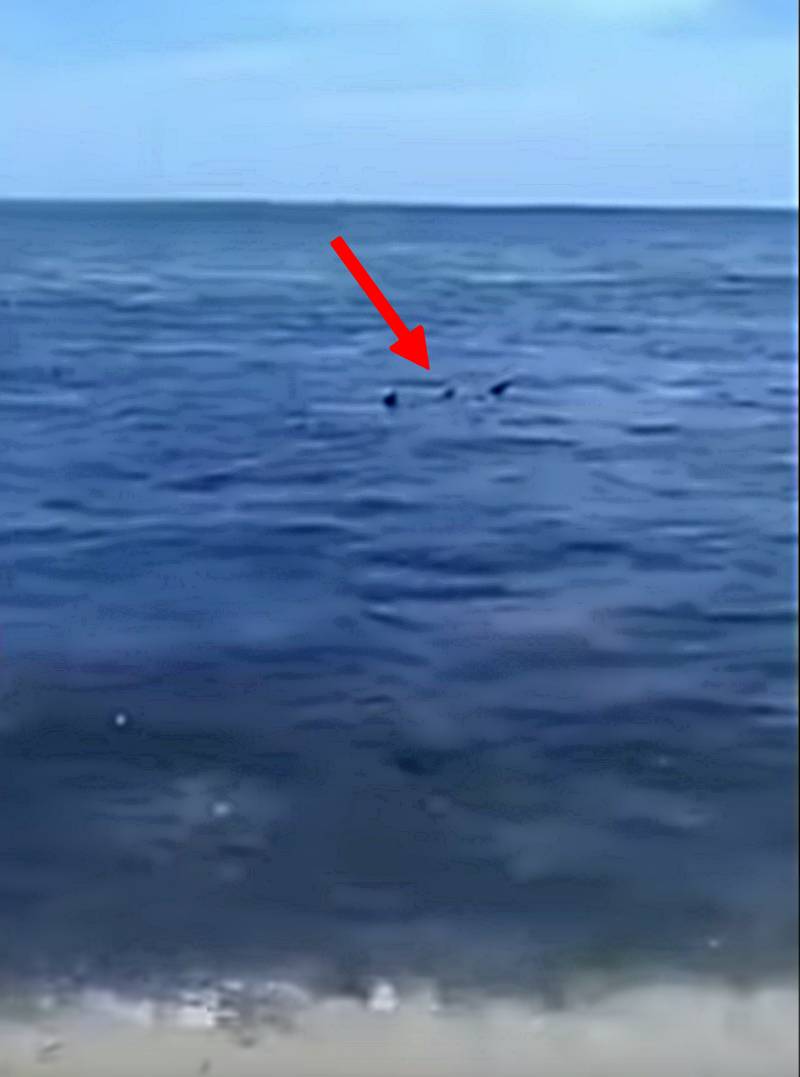 As the shark approaches the dog, the tail splashes in a frenzy. Immediately, several of the other dogs rush to their friends aid. 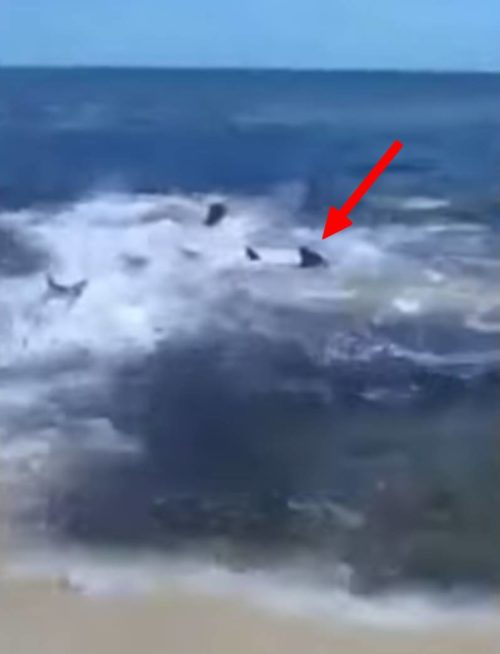 But the dogs aren’t quite finished showing this fish who’s boss! 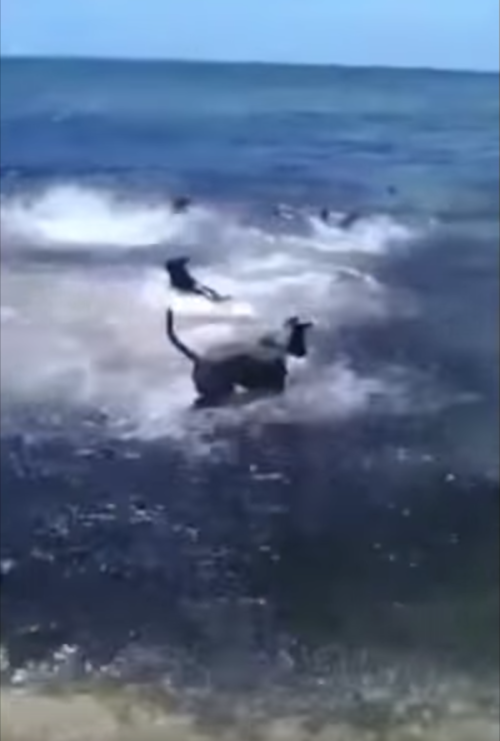 Undeterred, the shark begins to circle back to the biggest dog in the pack. 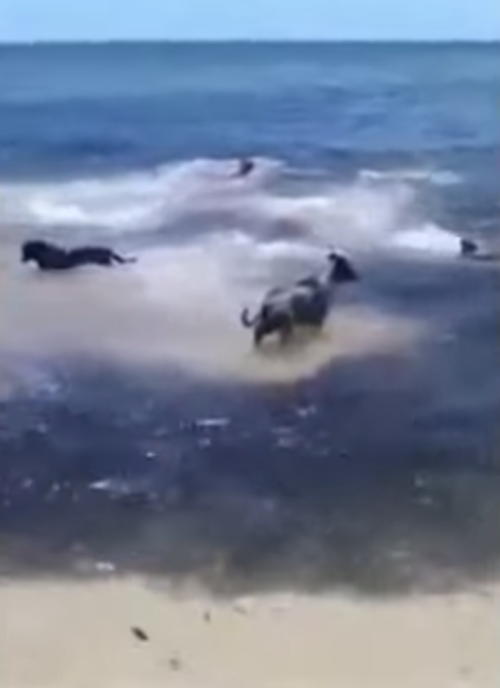 This big boy is standing his ground. 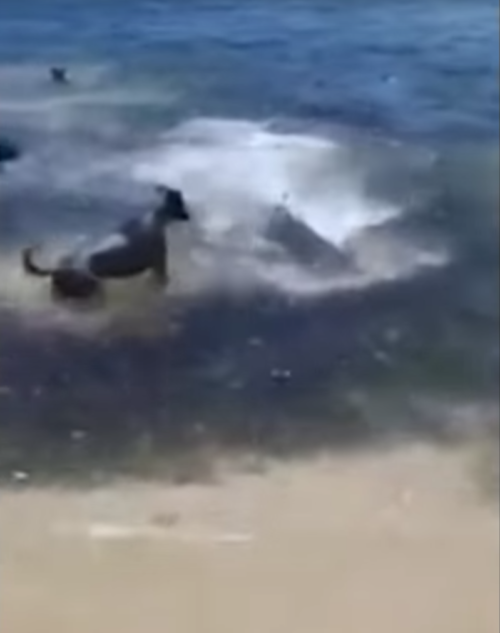 The showdown builds as the shark gets even closer. 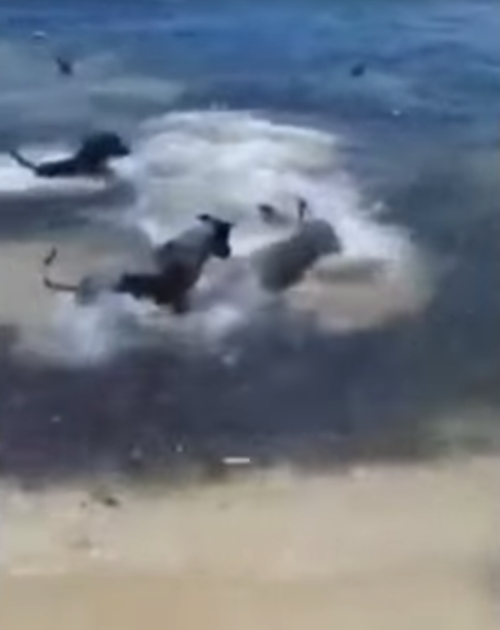 Nose to nose – these two giants face off. In the background, we can see a black dog coming to join the fight. 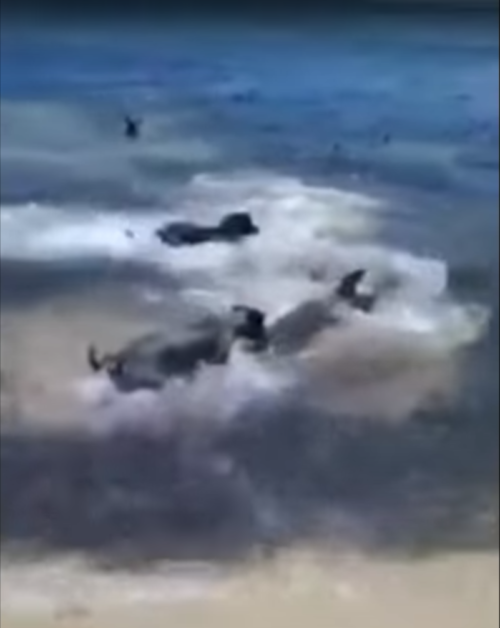 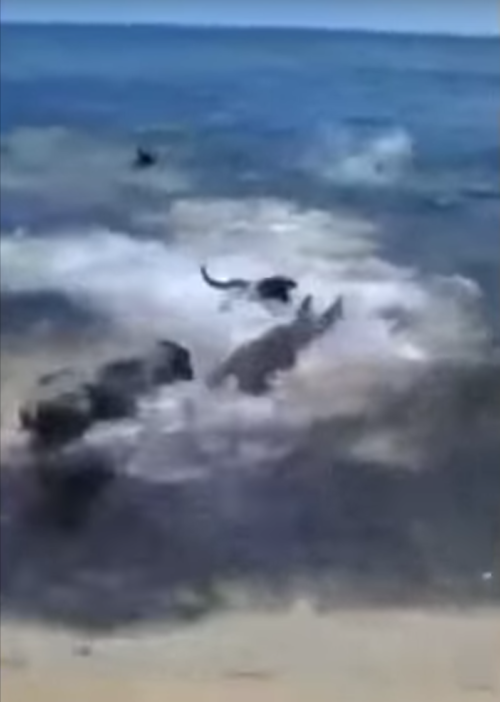 This feisty fish is about to get it from both ends! 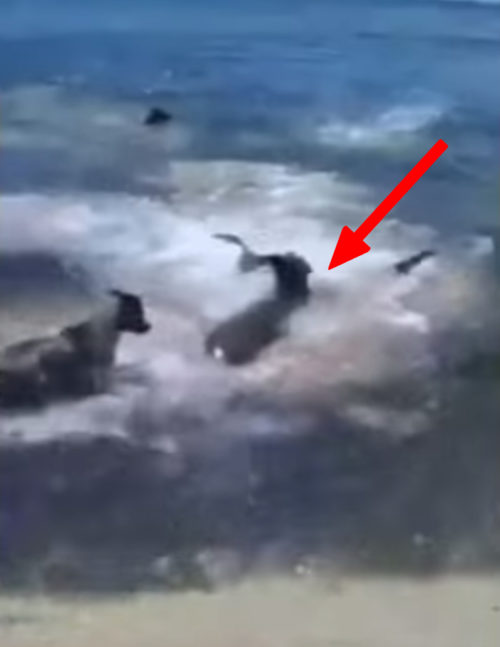 The black beauty actually grabs ahold of the shark’s tail, pulling it away from his friend. 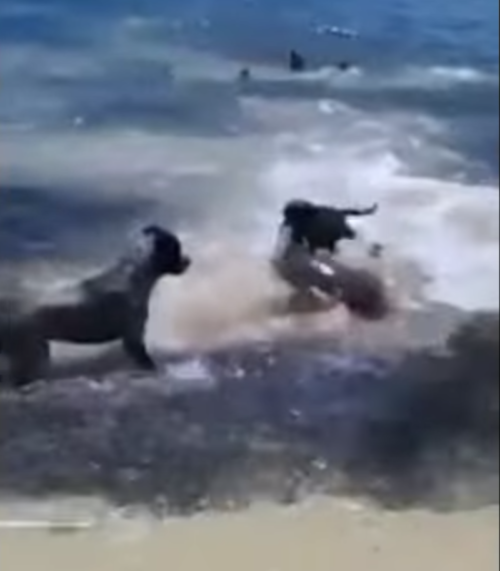 It looks like the shark has had enough and begins to swim away. 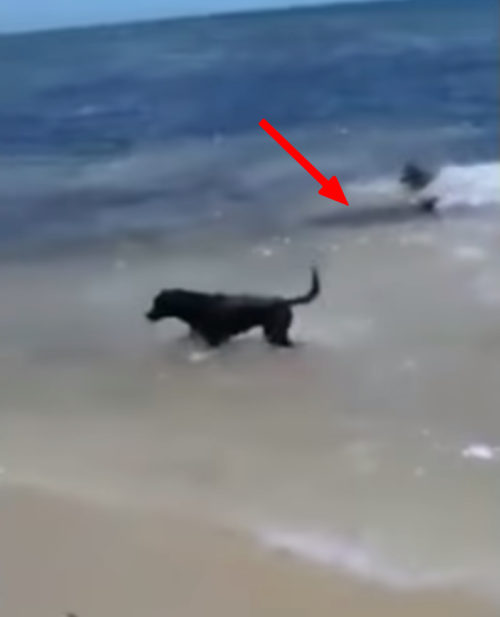 But it quickly circles back looking to make another pass. 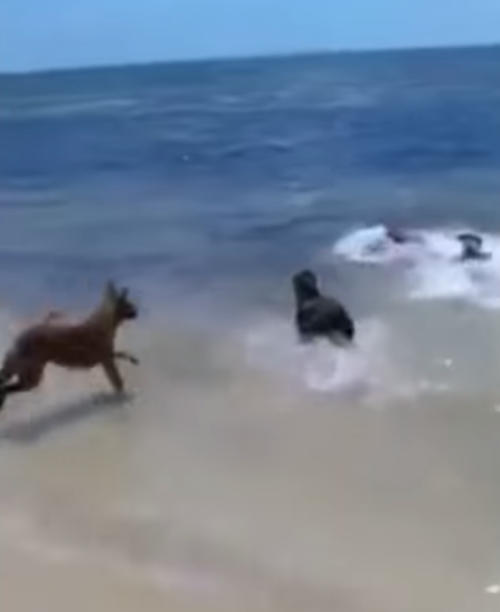 This time, the entire pack decides they’ve had enough. Together, they bark and pounce on the shark. 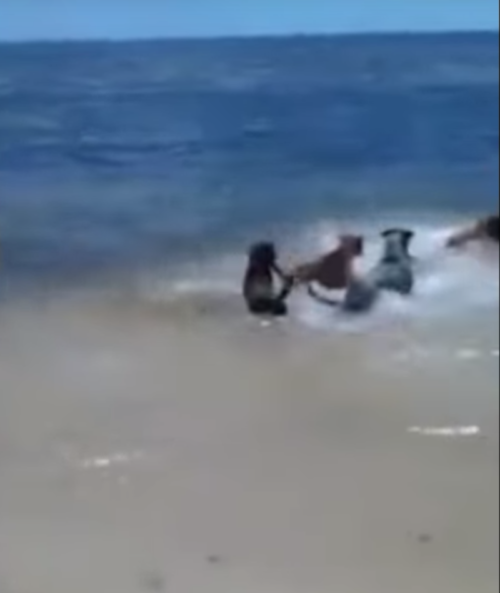 With strength in numbers, the shark finally realizes that this is just too much to handle. 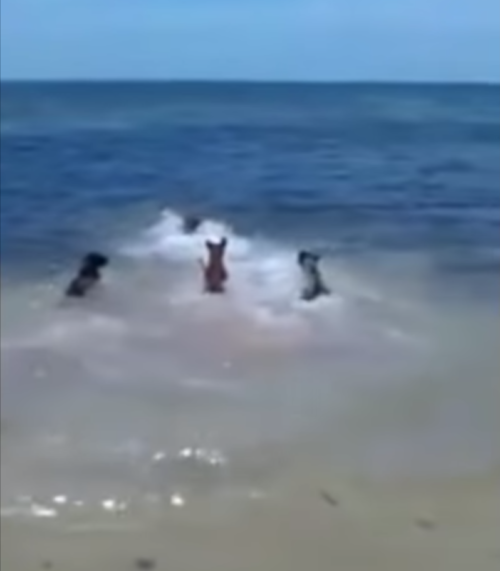 The dogs make sure this shark won’t be making a return visit. 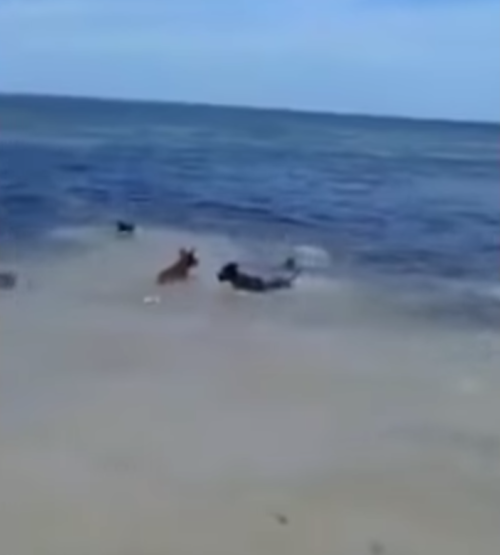 Here, the shark is seen swimming away – as far as it can get from the fiercely loyal pack of canines. 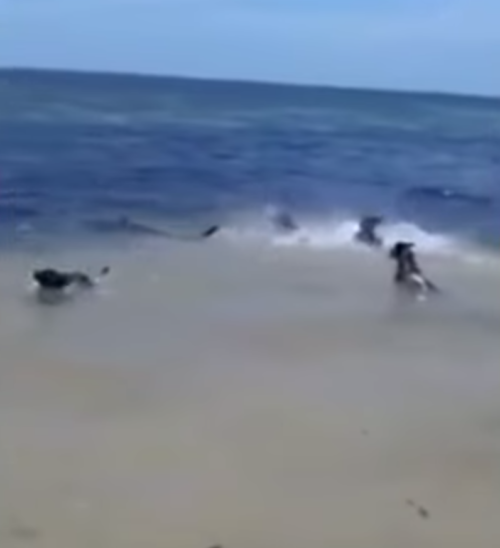 Victorious, the dogs return to the safety of land. Proud of themselves and the work they’ve done, tails wagging. 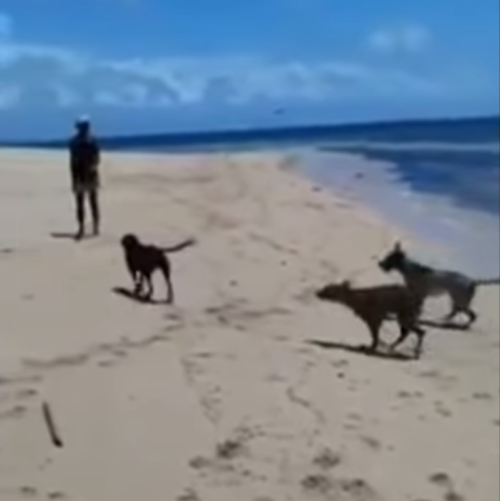 Let’s be honest – this is a terrifying encounter, and we wish the dogs had just left the water and returned to a safe place. Fortunately, no harm came to any of the dogs. However, this is an amazing example of the loyalty of dogs – not just to humans but to one another.

See the amazing video in its entirety below. Again, we’re just so thankful that all these pups got out of the water safely.