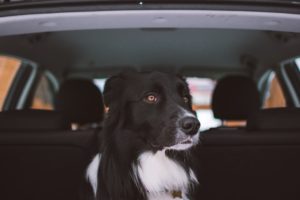 It was a warm day just two hours south of Albuquerque, New Mexico when a police officer was dispatched to a local supermarket to investigate a dog left a hot car. When Officer Kreischer arrived on the scene, in the ironically named town of Truth or Consequences, he found a dog with no air conditioning and no ventilation. As temperatures soared over 90 degrees that day, Officer Kreischer knew he had to act fast.

A Hero With a Heart

The pup’s owner, Shelly Nicholas, can be seen in the officer’s bodycam footage with her significant other and a child as they meander out of the store with their groceries.

“It’s 90 degrees! You keep a dog with no ventilation in there?” Officer Kreishcher scolded the woman as she approached.

The footage then shows Nicholas arguing with the officer, imploring him to “feel the interior” of the car.  She laughed as the officer explained the direness of the situation. Officer Kreischer consulted a chart and determined the internal temperature of the car was equal to 114 degrees Fahrenheit.

Nicholas was issued a misdemeanor animal cruelty citation but better yet, Officer Kreischer had a bigger lesson planned.

The dog-loving officer advised Nicholas, “Since it’s not hot, it’s cool, just sit in the car and wait.”

Shelly Nicholas reached out to her local news station to ask them to investigate her own complaint of the officer’s so-called abuse. This backfired for Nicholas, rightly so.

Officer Kreischer told KOB News that this wasn’t an order, but he implied that it was simply a suggestion since they were good enough conditions for her dog.

Why do dogs overheat so quickly?

The way dogs cool down is entirely different from humans and what might feel comfortable to us, can be catastrophic to them. Humans have sweat glands throughout our entire body and the evaporation of our sweat from these glands is what cools us down. Dogs, on the other hand, don’t have nearly as many sweat glands as us and therefore have a much more difficult time adapting to the heat.

Dogs primarily cool themselves through the evaporation of liquid off their tongue, manifested as panting. As My Dog is Cool points out, this can actually speed up a dog overheating in a hot car because a dog’s breath is typically 102 degrees Fahrenheit. Therefore, not only is excessive panting incredibly stressful for the dog, but they are actually heating the car faster with the air they exhale.

According to PETA, animals can suffer brain damage or die within 15 minutes of being inside a hot car.

What would you do?

Here are some tips.