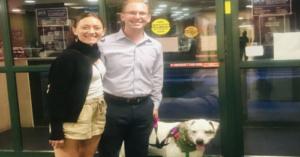 Bentley is a lovable American Bulldog mix, but he has had a long journey to find his forever home. He was the longest resident at the Pennsylvania SPCA. To be exact, he was there for 1,076 days, which is nearly 3 years total!

The PSPCA had posted so many videos and photos of him to help get him adopted, but for a long time, nothing seemed to be working. However, fellow dog lovers continuously shared Bentley’s story. Thanks to all the love and support, Bentley recently had some good news come his way.

Currently, Bentley is 7 years old. That means that he spent nearly half his life in a kennel! However, the staff at the PSPCA knew that he was an amazing dog, so they were determined to do everything possible to help him find his forever home.

Bentley was originally rescued by PSPCA’s Law Enforcement Team in October 2016. Since then, he had been waiting patiently at the shelter. He is a big dog at almost 100 pounds, but he is a sweetheart that just needs some love.

First, the PSPCA posted an adorable video of Bentley in a recreation of The Office intro. It was both cute and hilarious, but sadly, that didn’t get him enough attention just yet. So, they decided to start “Tuesdays with Bentley.” Every Tuesday, they would post a photo of Bentley along with some new information about him in hopes of catching someone’s eye.

After 1,076 days of praying for a place to call home, Bentley finally got his wish. A loving family came to his rescue, and he seems overjoyed.

A kind couple came to adopt Bentley, and in the photos they shared, all of them seem thrilled, especially Bentley. He even gave them a big kiss to show his gratitude. His first few nights in his new home will be an exciting experience that he’ll never forget.

“We will miss him, but more than that, we will celebrate that we didn’t give up – you never gave up. It’s been almost three years, half of his life, but together, we did it, we found him his perfect family,” posted the PSPCA.

Bentley not only appears familiar due to his video and Facebook posts, but he was also featured in a story for the Clear the Shelters campaign. Bentley ended up helping them get a $10,000 donation to help improve the shelter.

Not every rescue dog can find their forever home right away. Sometimes, it takes time like in Bentley’s case. Luckily, no one gave up on him though, and they kept pushing to help him find the home he deserved. Thanks to the wonderful staff at the PSPCA, Bentley now has a much happier life with his forever family.

The post Bentley the Bulldog Finds His Forever Home After Almost 3 Years in a Shelter appeared first on iHeartDogs.com.