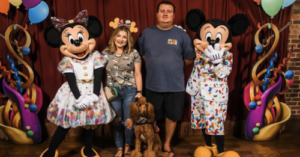 Jenn Bethune and Teddy, her loyal service dog, were just trying to have a normal vacation at Disney World. They shared lots of adorable photos together throughout the parks. In every photo, it looked like they were having an amazing time. However, their trip became a bit less magical when another guest decided to make a rude remark about Teddy.

Bethune is a wife and mother of four that owns a pet grooming salon. Besides Teddy, her family has 3 other dogs to care for. Her family loves going to Disney, and sadly, she has heard ignorant remarks about her and her service dog plenty of times before.

In this instance, a little girl that was passing Bethune pointed out Teddy to her parents. Instead of getting excited at the cute dog passing by, the parents grew bitter. They told their daughter that the service dog likely wasn’t “real” because Bethune looked “fine.”

Sadly, Bethune overheard their discussion. Instead of getting angry at the family though, she decided to make a Facebook post about the issue. Her goal was to bring attention to this common problem and confront anyone that was doubtful about her need for a service dog.

“You see, not all disabilities are visible,” Bethune posted.

Then, in her post, she goes on to explain that she has a service dog to help with her PTSD (post traumatic stress disorder). Sadly, she had to witness her own son die in a car accident on their way to Disney for his 7th birthday. Every day since it happened, she still sees the horrific scene, and it can often lead to panic attacks, night terrors, and severe anxiety.

Service dogs like Teddy are trained to distract someone with a panic attack, retrieve medications, get help, and even make sure the person has enough space in a crowded area. Therefore, Teddy is needed by Bethune’s side just in case a panic attack does occur.

Simply by being with her, Teddy helps make Bethune calmer. He can sense when a panic attack is coming, and will lean against her and give her the comfort she needs to feel happier and more confident.

Sure, many people assume that service dogs are just for people with a physical disability, such as a mobility issue or visual impairment. However, Bethune makes an important statement to prove that service dogs can be for so many different things. Therefore, you can’t just assume what’s going on in someone’s life simply by looking at them.

Teddy is very well-trained as well. Bethune has spend a lot of time training him with the All American Dog Training Academy. He remains calm in crowded areas, and does not bark or seek out attention like most dogs would. If someone were to fake a service dog, that dog would not be as well-behaved and attentive as Teddy is. He is always there by Bethune’s side to make sure she is doing okay and not getting anxious.

Therefore, while there are people out there who will try to fake their pet as a service animal, this is no excuse for people be rude to those that actually need them. Teddy is an essential companion for Bethune, and without him, her life would be much more stressful.

“You have no idea what someone has gone through and what they lived. Instead of judging someone, maybe just be empathetic to their situation and not make snide comments as they walk by,” Bethune wrote.

Therefore, next time you see someone with a service dog, be kind to them. No one likes things being assumed about them, so there is no need to be rude. Service dogs can come in all shapes and sizes, and they can be trained for a variety of different skills. Because of this, you can’t judge someone and their service dog when you don’t even know their story.