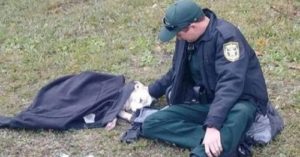 Deputy Sheriff Josh Fiorelli recently went viral for his on-the-job kindness. On a cold winter day, he found himself caring for a dog – a creature a bit out of the ordinary from his normal human interactions.

Carlos Irizzy was out on his daily walk when he came across a police officer sitting in the grass, petting a white dog that was lying under his coat. It turned out that this sweet pup had been hit by a car, and stumbled into the grass looking for a safe place to lay. Sheriff Fiorelli saw the terrible accident, and rushed to the injured dog’s side. Carlos Irizzy then captured the sweet moment that soon went viral.

Deputy Fiorelli cares for an injured dog who was hit by a car and waits with him until animal control arrives. Thank you…

The Sheriff immediately called animal control to report the accident, but knew it could be several minutes before animal control would arrive at the scene. He couldn’t bear the thought of this terrified pup waiting all alone, so he decided to stay with her.

It was a cold and rainy day, so on top of being injured; the poor dog was freezing cold. Fiorelli gave the shivering dog his coat, in an effort to keep her as comfortable as possible in her desperate situation. Side by side, the two sat and waited for help to arrive.

“It was cold out. She was wet. She didn’t have anyone there so I decided to be that person.” – Fiorelli

Osceola County Animal Services took the injured dog into their care, and found that she had a serious injury in one of her legs. Her hip was dislocated, and required a surgery to repair the damage. With the skilled team at the Osceola Animal Shelter, she was on her way to recovery!

Sheriff Fiorelli captured the hearts of animal lovers all over the internet. He even caught PETA’s attention, and received a framed certificate, along with a batch of delicious vegan cookies.

“This police officer showed immense kindness by staying at this dog’s side and giving her some comfort when she was afraid and in severe pain. PETA hopes his actions will inspire people always to treat animals with care and compassion.”   PETA Vice President Colleen O’Brien

This injured pup now goes by the name of Fiona, and is still looking for her forever home! If you are near Osceola County, Florida and are looking for the perfect four legged friend, you can learn more about Fiona here.

The post Officer Wouldn’t Leave This Injured Dog’s Side Until Help Arrived appeared first on iHeartDogs.com.