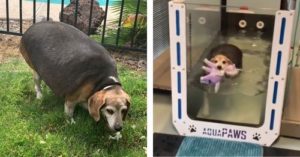 Wolfgang the Beagle was found wandering the streets of Arizona, carrying around a debilitating amount of excess weight. Luckily for Wolfgang, he has found a new set of owners who are dedicated to bringing him to health!

It’s not every day that you find a 90 pound Beagle wandering the streets as a stray. The team at the Arizona Beagle Rescue knew there had to be more to this stray pup’s story, and decided to welcome him into their rescue for further care.

Hi guys, my name is Wolfgang and I was rescued this weekend by @arizonabeaglerescue and now I’m concentrating on living my best life! I weighed in at 87 pounds and I’m sixteen inches wide. I don’t fit through foster mom’s dog door, but we are going to work on that. Follow me on my journey as I go from obese to beast!. #beaglesofinstagram #beagle #wolfgangthebeagle #obese #obesetobeast #weightlosstransformation #shelterdog #adoptdontshop #arizonabeaglerescue #grumpybeaglesunited @smug_beagle @az_beaglefarm

Upon examination, Wolfgang was found to have a thyroid condition that can make it quite difficult for him to lose weight. Aside from medication, he would need a dedicated team of helpers to achieve the weight loss he needs to survive. Erin McManus and Chad Schatz were up for the challenge, and welcomed Wolfgang into their home.

Almost immediately, Wolfgang began the process of shedding his unwanted pounds. His new parents make him a special diet of lean meats and vegetables each, as well as being diligent with his much needed thyroid medication. With the level of obesity that Wolfgang is experiencing, it will take more than a diet to bring him to a healthy weight. The couple soon found a list of ways to get Wolfgang moving at his own pace!

“Now that that don't kill me Can only make me stronger”🎶🎶 . I’m working on pushing through any obstacles that might try to hold me back. I try to stay positive all the time, but sometimes I feel a little down. It is hard being over 3 times my goal weight. Yesterday I was really sad because I wanted to get on the couch but Dad said I couldn’t because I could get hurt if I tried to jump off. My brother Andre gets on the couch whenever he wants! However, I felt better when Fred said he would go on a walk with me – Fred is almost 16 and still goes on walks! Sometimes I think Fred might be part unicorn 🦄. . . Also, after we got back, Mom gave me one of my @austinandkat treats that were donated to me (that are especially designed for large unicorns 🦄 like myself), so that made me feel better too ! I’m going to stay focused on all the things I can do, but the parents said it was ok to feel upset every once in a while. . . . . #beagle #beaglesofinstagram #keto #weightlosstransformation #obesetobeast #shelterdog #motivationmonday #dogsofinstagram #fitness #fitnessmodel #determination #diet #arizonabeaglerescue #bodypositivity #fitness #weightloss #goals #lowcarb #wolfgangthebeagle #cleaneating #adoptdontshop #phoenix #scale #nevergiveup #cbdoil #cbdforpets #cbd

Some of Wolfgang’s favorite activities include swimming around the pool with assistance from his fur dad, playing in the yard with his new four legged siblings, and most impressive; his aqua exercises at a rehab facility.

This chunky pup’s new favorite exercise is his aqua aerobics on a doggie treadmill, all while having his favorite toy in his mouth at all times! Since beginning his rehabilitation, he has been able to increase his speed, and is significantly more comfortable during his exercises.

I had another appointment with Dr. Julie (my fairy 🧚‍♀️ dog-mother) and she set the treadmill to the highest speed that I’ve ever done! I bet my @fitbark was going crazy! She really knows how to push me to my limits, and it really makes me feel like “the man” 🎶🎶 ! She just wants to get me ready to meet my goal of walking a mile on November 17! . . Many of you also know I’m the mascot for @fourleggedrunning Half Marathon, 5k, and Dog Mile scheduled for ‪November 17th‬ and $20 of every entry is donated to different animal rescue groups, including @arizonabeaglerescue !!➡️➡️🦄🦄 I’ll be doing the Dog Mile ! . . The live race is occurring in Illinois, but there is a virtual option so if you want to join me wherever you are, you can !! Plus, If you are in Phoenix you can walk with me (also even if you don’t officially sign up you can still walk with me and hang out with me on the 17th). The 17th is also my birthday so I hope there will be birthday cake after the walk 🎂 ! Mom is going to scope out potential meeting places this weekend! . . . . . . . . . #beagle #beaglesofinstagram #effyourbeautystandards #weightlosstransformation #obesetobeast #shelterdog #dogsofinstagram #fitness #rescueismyfavoritebreed #diet #instafit #arizonabeaglerescue #bodypositivity #fitness #weightloss #goals #fitbark #wolfgangthebeagle #chonk #chonker #cleaneating #adoptdontshop #fattofit #cbd #cbdforpets #fat #fourleggedrunning #firbark

Since starting his weight loss journey 6 months ago, Wolfgang has lost an impressive 22 pounds! Wolfgang now loses a consistent 1-2 pounds each week, and is continuing down a healthy weight loss path.

His owners are so proud of his incredible resilience, and his ability to keep his spirits high during every step of this process. Erin created an Instagram account to track Wolfgang’s progress, and she is amazed by how many people Wolfgang continues to inspire each day.

Excuse me, does anyone know who that dog is on the left? I’m just teasing! I know it is me! I like looking at old photos of me because it is a good reminder of how far I’ve come! I was 90 pounds in the picture on the left and I was still so happy, because I knew things would get better, and I’d go from ‘obese to beast’ 🦄🦄💪💪💪 . . . . . . . . . . . #beagle #beaglesofinstagram #effyourbeautystandards #weightlosstransformation #obesetobeast #shelterdog #dogsofinstagram #fitness #rescueismyfavoritebreed #diet #instafit #arizonabeaglerescue #bodypositivity #fitness #weightloss #goals #fitbark #wolfgangthebeagle #chonk #chonker #cleaneating #adoptdontshop #fattofit #cbd #cbdforpets #fat

Wolfgang sure is an inspiration for anyone who is on a similar journey to a healthier lifestyle. We can’t wait to watch him crush all of his goals!

The post 90 Pound Beagle Is Found Wandering The Streets – New Owners Take Him On An Impressive Weight Loss Journey appeared first on iHeartDogs.com.