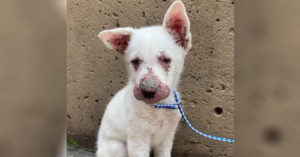 We’re so grateful for rescue organizations that put all their efforts into caring for sick or injured animals without homes. The downside is that veterinary treatment, especially when it’s an emergency, can be very costly. Shelters are often extremely pressed for funds which makes their wonderful work difficult. Still, a dog’s suffering should never be about finances.

One animal shelter in Chicago believes this too.

Volunteers from One Tail At A Time, a Logan Square-based rescue organization, were at the Chicago Animal Care and Control shelter over the weekend when a man brought in a puppy he found at a construction site in Woodlawn.

The tiny white puppy, estimated about 3 months old, was not in great shape. Her paws were swollen and she appeared to have a skin infection that left raw red spots all over her. She also acted very lethargic.

We have been working our shelter diversion program all day at animal control, and we have been inundated with owner…

One Tail At A Time named the tiny sweetheart Parmesan Crisp.

Her skin condition made her breed difficult to determine. Rescuers guessed that she might be a white German Shepherd.

Clearly the poor little gal needed emergency veterinarian care and was brought in right away. Parmesan remained at the vet overnight and, after being discharged, was thankfully taken in by a foster home. She is currently resting as she receives treatment.

Parmesan Crisp update: she has been diagnosed with an autoimmune disorder called juvenile cellulitis (puppy strangles). Right now we’re concentrating on getting her the medication and rest she needs. We think she’s about ~2-3 months old. We had several new members sign up after we posted about her story, so THANK YOU! We let her know there are a lot of people rooting for her. #teamparmesancrisp 💪

Heather Owen, co-founder of One Tail At A Time, told Block Club Chicago that Parmesan is doing slightly better with care, but it still having a rough go of it all. Apparently she’s not so into her medication routine.

“You can tell she doesn’t feel good, but she’s got a little bit of that puppy feistiness in her. She’s not happy about taking her medication, which is not always fun, but it’s a good sign because it means she’s starting to feel better.”

The veterinarian diagnosed Parmesan with autoimmune disorder Juvenile Cellulitis (also known as “Puppy Strangles.”) This disorder is most common in puppies between three weeks and four months old and is not typically seen in adult dogs. It mostly affects the puppy’s face, outer ears, and salivary lymph nodes. Parmesan will require medication to get better.

OTAT’s emergency fund tends to be lower this time of year, and they’re not able to predict with certainty what the costs of Parmesan’s continued care will be. In addition to that, several other residents of the shelter need costly care too.

After OTAT issued a plea for help on Facebook, over $4000 in donations came in over the weekend. As of today, the fundraising is up to over $5,500.

“It makes us so grateful because every time we have a big emergency vet bill we worry that we won’t be able to do our normal level of rescue, but when people get together and help us raise the money then we know that we can keep rescuing animals.”

With more rescues coming in every day, One Tail At A Time can always use more donations for Parmesan and the other injured dogs who reside there. You can contribute to their cause here!

Parmesan Crisp says THANK YOU to every single person who donated to her care. She’s in a foster home where shes learning how to be a happy puppy. This would not have been possible without all of you!

Here’s hoping sweet Parmesan Crisp gets all the care she needs so she can start focusing on finding her furever family!

The post Chicagoans Donate Thousands To Help A Sick Puppy Rescued From A Construction Site appeared first on iHeartDogs.com.