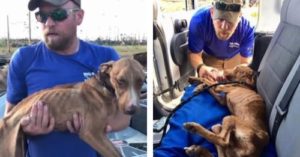 The Big Dog Ranch Rescue is working tirelessly to find dogs in the Bahamas that are still in need in the aftermath of Hurricane Dorian. By using new methods of technology, they came across something incredible.

The Bahamas are still dealing with the aftermath of the devastation that Hurricane Dorian left behind. Along with the locals in the area, are the pets that have been left to fend for themselves, and fight for survival in a desperate situation.

While working in an area with so much debris from the storm, rescuers have started to get creative with their searches. With the help of a drone, rescue workers found Miracle; a severely emaciated pup who had been trapped under an air conditioning unit for the last month.

When rescuers saw this sweet boy on the drone footage, they had no idea what to expect. Once they arrived to the scene, they realized just how serious the situation was. Miracle appeared to be pinned between heavy metal, and there was no way to know just how seriously injured he was. After working to lift the debris from his legs, Miracle was able to crawl to her rescuers.

The first thing you see on his rescue footage is the immediate wag of his tail at once he was freed. It was obvious just how gracious he was to his rescuers, and how relieved he was to be in their loving arms.

After examining the area where Miracle was found, his harsh reality for the last month became clear. He was fighting to survive with only the consumption of rain water, and the possibility that any small critters crossed his path.

Miracle is now under the care of The Big Dog Ranch Rescue. They have made it their mission to make up for the time that this poor pup has suffered, and offer him a future filled with hope.

Miracle defied the odds to survive, and with the help of his dedicated team of rescuers, he will see another day. We are so grateful for the incredible work that The Big Dog Ranch Rescue is providing for the dogs of the Bahamas.

It’s unclear at this point if Miracle had a family. If a family for him does not come forward, he will be looking for a forever home once he has fully recovered. If you are interested in following Miracle’s story, you can keep up on the Big Dog Ranch Rescue’s Facebook page.

The post Dog Found Alive After 1 Month Of Being Trapped Under Hurricane Dorian Rubble appeared first on iHeartDogs.com.