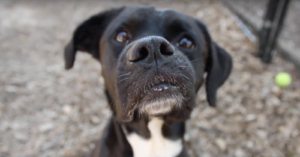 Mosley is a sweet dog with a crooked snout. Sadly, at his previous shelter, he was overlooked because of this simple birth defect even though it doesn’t affect him in any way. Luckily, his new shelter shared his photo on social media, which caused him to gain tons of loving fans.

Before he was even officially up for adoption, Lindsey and Anson had their eye on him. They weren’t even looking for a dog just yet, but the second they saw his picture online, they fell in love.

Lindsey and Anson’s dog had passed away a few years ago, so they still weren’t sure if they were ready for another dog just yet. However, they knew it couldn’t hurt to at least visit him. Also, since he was becoming so popular on social media, they knew they had to act fast.

When they went to visit Mosley, Lindsey kept reminding her family that they weren’t coming home with a dog. She kept saying it over and over again, but right away, she knew that wasn’t true. After only a 10-minute meeting with Mosley, they knew that he was meant to be a part of their family.

Lindsey said that when she sat on the floor at the shelter, Mosley immediately came over to give her love and affection. After that, it was near impossible for her to continue saying no.

With the whole family in agreement, they signed the papers and brought Mosley home with them. To them, his crooked face was adorable, and they couldn’t believe that he had been overlooked at his previous shelter.

Mosley was so excited to be home with his new family. Not only did he love Lindsey and Anson, but he got along extremely well with their two sons. He even ended up bonding with their cat over time. The cat had been unsure about Mosley at first, but eventually the sweet dog won him over.

Mosley’s past is mostly unknown, but Lindsey and Anson believe that he had someone to love him before. He knew all the basic commands and he was completely potty trained when he came home with them. He is such a well-tempered dog, and they are so happy that they decided to adopt him.

After a long time searching for the perfect family, Mosley finally found them. His crooked nose does not get in his way. In fact, it only adds to his cuteness, and anyone who ignored him because of it is missing out.

All dogs are different, which means they all equally deserve to be adopted. Next time you visit a shelter, don’t overlook any dogs because you never know which one will be the perfect companion for you.

The post Dog With Crooked Snout Finally Gets The Love He Deserves With A New Family appeared first on iHeartDogs.com.