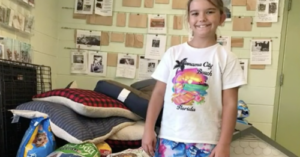 Hailey Pugh is a young girl that just turned 10. She had an exciting birthday party that was complete with a bounce house, a Kona ice truck, and unicorn decorations. However, Hailey’s birthday wish was a little different from the other girls her age. Instead of asking for presents, she asked her guests to help animals in need by donating to the local shelter. Saving animals is much more important to her than getting new things.

Specifically, Hailey requested that her guests bring donations for the Boone County Animal Shelter. She received a wide assortment of food, toys, blankets, and beds for the animals at the shelter.

Hailey explained that while she’s always grateful for the birthday presents, she doesn’t really need them. The shelter animals need much more than she does.

“It’s wonderful for the shelter and for the staff to know that there are kids out there thinking and talking about it,” said Colleen Bray, the Boone County Shelter Director. “A lot of times people don’t think about the animals that have to live here in the shelter.”

Hailey’s love for animals has been going on forever. Over the years, her family has rescued lots of dogs and cats. Currently, they have 2 dogs, 3 cats, a sugar glider, and a hamster. So, they are used to rescuing animals and they will continue to rescue in the future.

When Hailey was asked why she liked helping animals so much, she explained that she wants to be a veterinarian when she grows up. She said that she saw news stories about animals getting hurt, so she wanted to do anything she could to help. So, of course, she thought her birthday would be the perfect opportunity to make a difference.

“It was really great that she found something that she’s so interested in and she’s so passionate about. I wasn’t ever really allowed to have animals as much when I was younger so we’ve kind of embraced her love for animals,” said Tamara Young, Hailey’s mom.

Hailey’s family is very grateful for all the donations that were received. They want to help make the shelters better for animals because the shelter animals they adopted have made their home a better place too.

When she’s older, Hailey hopes to volunteer at the shelter, but for now, she will just keep helping in any way that she can. Her birthday wish is just the beginning of a life of helping animals. Her passion will hopefully inspire others to help out animals in need more often as well.

The post For Her Birthday, Young Girl Asks for Animal Shelter Donations Instead of Presents appeared first on iHeartDogs.com.