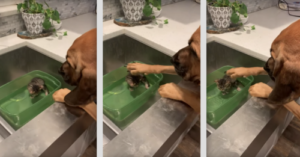 Large dogs can often get a bad reputation, but they’re usually big sweethearts. Ruby Jane, an affectionate 5-year-old Bloodhound, proves that everyone can be loving. This is because Ruby Jane has a soft spot for rescue kittens.

Stephanie Vice is a veterinary technician in Lakeland, Florida. Vice and her husband, Matthew, often foster kittens at their home. Ruby Jane is always loving toward all the rescue kittens she encounters. In fact, a video of her comforting a rescue kitten recently went viral.

Throughout her life, Ruby Jane has interacted with over 100 different rescue kittens. However, she recently bonded with Bodie, a nervous 5-week-old kitten.

Vice brought Bodie home from the SPCA Florida no-kill shelter along with his two siblings. Since the kittens are so young, Vice will be fostering them until they are old enough to be put up for adoption.

“Ruby Jane is a very playful dog and is very good with all of the foster kittens,” said Vice.

Since the kittens that have grown up with Ruby Jane do not have a mother, the sweet Bloodhound does her best to care for them. Bodie is just one of the many kittens she has looked after over the years. She knows exactly how to be gentle with them.

In the video, Bodie is taking a bath, and he is shivering. Luckily, Ruby Jane is right beside him, comforting him throughout the whole process. At first, Ruby Jane is just looking over the sink at the tiny kitten. Then, she gently pets him with her large paw to help calm him down. After watching this video, there should be no doubt that cats and dogs can be great friends.

Throughout the video, Vice narrates what she thinks Ruby Jane is trying to say. She says things like “it’s okay, it’s just a bath” as the large dog pets the kitten. Surprisingly enough, Ruby Jane’s attempts seem to cheer Bodie up a bit.

After vice posted this video, it received over 8,600,000 views in only a few days. It’s near impossible to view this adorable video without saying “aww!”

Despite living with 107 different kittens throughout her life, Ruby Jane has become very fond of Bodie. Even though they are two very different creatures, Ruby Jane and Bodie prove that a true friendship has no limits. Hopefully Ruby Jane’s kind actions can help to encourage others to spread kindness as well.