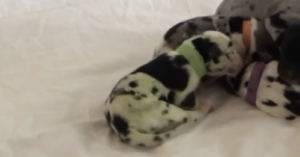 Caddy Williams woke up early one morning because she knew Ami, her 3-year-old Great Dane, was about to give birth. She was ready to help and of course, she was excited to meet her dog’s new puppies.

She knew all the puppies would be special, but one puppy ended up being even more unique than she had imagined. This is because one of the 9 puppies was born naturally green!

All of the other puppies were born with normal colors similar to their mother. Most of them were a mixture of black and white. However, one single puppy was born with a green tint in her coat. Williams had never seen anything like it before!

When the puppies were born, Williams took note of all their varying coat colors. When she observed the green puppy, she had to look twice.

It was a little dark, so at first, she thought she was just having a hard time seeing this puppy. She thought maybe it was the lighting or maybe the puppy had gotten dirty somehow. However, even after cleaning her, she still appeared green, so Williams knew it was not just her imagination.

“It was so shocking when she was born,” said Williams. “Luckily, I had recently read an article about a green dog. So at least I knew what was going on.”

This adorable Great Dane is not the first puppy to turn out green. There have been a few other recent stories about green puppies being born. However, it certainly is not a normal color for a dog.

Why is This Puppy Green?

Green puppies are actually a phenomenon that is believed to happen when puppies with light-colored coats come into contact biliverdin, which is a green pigment found in bile. It is the same pigment that can cause bruises to turn green, so it likely dyed the puppy’s fur in the womb. The color is often more bright when they are a puppy, but then it slowly fades over time.

Luckily, this green coloring does not seem to be harmful to the puppies in any way. It is just a part of their appearance that has no negative health aspects to the puppy or the mother.

“She’s healthy and beautiful and she nurses so well,” said Williams. “I just love her. She’s like a little shamrock puppy.”

Due to her green coloring, Williams decided to name the puppy Verdant. Verdant’s green coloring is guessed to fade away within a few weeks, but Williams will never forget the surprise she felt when she saw her green puppy for the first time.

Both Ami and all her puppies are healthy. Ami has proven to be a great mother, especially to sweet little Verdant. It’s not every day you see a green puppy, but just because she’s unique doesn’t set her apart from her siblings. Every dog is adorable no matter what.