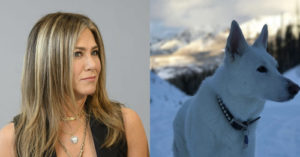 In July, Jennifer Aniston lost her beloved White Shepherd named Dolly. She had rescued Dolly almost 14 years ago, so it was heartbreaking to finally have to say goodbye. So, to honor Dolly, she wore a special necklace with a pendant that had a picture of Dolly’s face. The photo is surrounded by diamonds, and she wore it on the Morning Show as a tribute to her beloved dog. Dolly was like a child to Aniston, so she will be missed greatly.

Aniston arrived at the Morning Show wearing a black outfit and lots of jewelry. However, one of her necklaces was much more special than the others. It had a clear photo of Dolly in it, so she proudly wore it on TV for the world to see.

After Dolly’s death, Aniston was reunited with her ex-husband, Justin Theroux for the burial. While they were dating and during their marriage, Dolly had been there, so it was also an emotional time for Theroux as well. Theroux posted beautiful pictures on his Instagram of Dolly’s outdoor burial ceremony.

Aniston and Theroux were a couple for seven years, and married for two and a half. During their wedding in 2015, Dolly and her sister, a Pit Bull Boxer mix named Sophie, went to a dog spa to get ready for the wedding. So, even though the couple is no longer together, Dolly was there for all the big moments in their life.

Theroux posted a photo of Dolly on his Instagram, followed by a series of images that were taken at her burial. The beautiful dog is seen covered in flowers and there is even a photo of Aniston and Theroux holding hands above her body. In the last photo, it shows them wrapping her in a blanket as they say goodbye.

“Tonight, at sunset, after a heroic struggle … our most loyal family member and protector, Dolly A. laid down her sword and shield,” posted Theroux.

Dolly was a rescue dog, and so are Aniston and Theroux’s other dogs. They love rescuing dogs and they encourage others to adopt as well. Theroux even added the hashtags “adopt don’t shop” and “rescue dog” at the end of his post.

Nothing brings people together more than the love of dogs. Unfortunately, Aniston and Theroux had to come together under heartbreaking circumstances, but at least they got to say goodbye to Dolly properly. They will both miss her very much, and Aniston will still have her special Dolly necklace as a memory that she can always bring with her.