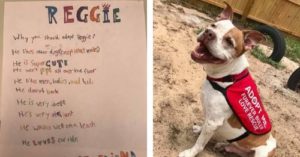 Reggie is a 9 year old, loving Pit Bull that’s currently being fostered by a family in Florida. Being a senior dog, he is having some difficulty finding a home. Despite the odds stacked against him, his very best human friend, Elivia, is determined to find his forever family.

Reggie was recently rescued from a crowded shelter, and placed in a foster home with Thea-Marie Parent and her 10-year-old daughter Elivia. Parent runs a boarding service from her home, so they are no stranger to caring for dogs of all kind.

In his foster home, Reggie has grown to show just how wonderful of a family dog he is. He has learned new tricks, has incredible manners, and even gets along well with most dogs that he encounters.

The most incredible part of his journey in the Parent home is the bond he has formed with Thea-Marie’s daughter, Elivia.They have truly become the best of friends.

Parent describes how Reggie and Elivia will be outside for hours, playing together and learning new tricks. The two have become inseperable, leading Elivia to wonder why anyone wouldn’t want to adopt her new furry friend.

Due to the Parents’ continued fostering, they know that officially adopting Reggie would hinder their ability to continue to foster dogs in their home. They want to make sure they are available to help other dogs like Reggie in the future, so they have dedicated themselves to finding a perfect home for Reggie.

In their efforts, Elivia wrote a heartfelt note on just how amazing she thinks her new companion is. This special note is now being shared on multiple social media platforms, in hopes that it will be the key to finding Reggie’s forever home.

“Why you should adopt Reggie?

He likes other dog (except intact males.) He is super cute. He won’t pee all over the floor. He likes men, ladies, and kids. He doesn’t bark. He is very soft. He’s very obedient. He walks well on a leash. He loves car rides. He is totally best friend material!”

With a note as special as that, it’s only a matter of time before the potential adopters come flooding in!

While Elivia loves her new pal, she understands that this is a part of the foster process, and that the goal is to take care of him during this part of his journey.

Reggie is still waiting for his forever home, and would love the chance to be a part of your family! If you are interested in adopting Reggie, you can contact the Forever Bully Love Rescue.

The post Little Girl Makes A List Of All The Reasons You Should Adopt Her Furry Friend appeared first on iHeartDogs.com.