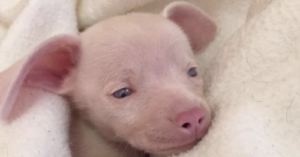 Sadly, when breeding dogs, some breeders don’t consider the possible health issues that could arise. Piglet is a mix between a Chihuahua and Dachshund, and both of his parents were a dapple coloring. When two dogs of this coloring are bred together, there is a 25% chance that the puppies will become a “double dapple,” which is typically linked to the puppy being partially or completely blind and deaf. Unfortunately, Piglet was one of those puppies, and he is completely blind and deaf, but he doesn’t let that hold him back.

Piglet got his name because of his light pink color as a young puppy. He is such a sweet, adorable dog, but because of his special needs, he needed a home that was willing to give him extra attention and love.

Piglet was found in a hoarding situation in Georgia with 37 other puppies. Then, from there he was taken to Connecticut where he met Melissa Shapiro, a veterinarian. At first, Shapiro was just planning to foster Piglet, but it didn’t take long for her to fall in love with him. After only two months of fostering him, she knew that he belonged with her.

Shapiro already had 6 other dogs, but she was happy to invite one more into her family. She admits that Piglet is a lot of work, but he is definitely worth it.

At first, caring for Piglet was like a full-time job. He was very attached to Shapiro and would scream when he was anxious, which was most of the time. He got bad separation anxiety when Shapiro would leave the house, so for the first month, she couldn’t even leave him alone.

After a few months in his forever home, Piglet got into a routine and he got more comfortable with his surroundings. He loves to play with his siblings, go for walks, and travel with Shapiro for work. He refused to let his special needs hold him back from having the life of a cheerful puppy.

A third grade teacher in Plainville, Massachusetts heard about Piglet’s story and decided to share it to her class. She taught them about Piglet’s positive mindset and how it helped him to overcome obstacles. He also inspires kids to deal with and embrace differences

The students use Piglet to help with their growth mindset, so they try to keep a “Piglet state of mind,” and when they are faced with challenges, they ask, “what would Piglet do?” The kids often send hand-drawn cards to Piglet, and both Shapiro and Piglet adore them.

Piglet and his family also raise money to help special needs rescue dogs. They sell a large variety of Piglet merchandise including shirts, stickers, magnets, and bags. In total, they have raised over $30,000 so far!

On Piglet’s website, there is also a list of educational PDFs for classrooms to use. Piglet is an inspiration for both humans and dogs, and he works hard to encourage adoption and put smiles on faces all over the world.

Shapiro and Piglet will continue to help and inspire others as the years go on. Piglet had a rough life in the beginning, but thanks to Shapiro, he is now a mascot of kindness and acceptance. Piglet’s journey inspires others to adopt, especially the dogs that have special needs like him. They might need some extra attention, but they are worth the extra effort without a doubt.

The post Piglet the Pink Puppy Can’t See or Hear, But He Inspires Kids Every Day appeared first on iHeartDogs.com.