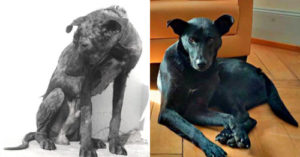 Valia Orfanidou is a dog lover who volunteers her time at shelters around Athens, Greece. She regularly fosters dogs who need her, so she follows many rescue groups in the area to see how she can help. One day she saw an image of the saddest dog she had ever seen. He was shockingly skinny and nearly hairless. She wondered how the dog could still be on his feet.

She Was Sure He Wouldn’t Live

Valia tried to pinpoint where the poor dog was located. From a photo containing a train station she was able to determine that the dog was in a town about 70 miles away from her home city of Athens. She enlisted the help of friend from a rescue group, and they set out together to find him. When they did, they were certain that he would not survive much longer. He could hardly walk, his skeleton was clearly visible, and he was infected terribly with mange. Valia and her friend were certain that the best they could do for this forgotten and ignored creature was help him die with dignity.

The Vet Said He Should Be Fine

Valia was stunned when after a vet gave him an exam and bloodwork, he said that the dog, now called Billy, could make a full recovery.

“When the vet told me that, I honestly laughed. I couldn’t believe it,” she told the Huffington Post. “And then I became impatient. I wanted to see him recover.”

Valia wrapped Billy up and took him home to begin nursing him back to health.

At first, Billy was so weak that he would sleep all day and night, only rising once to eat. He seemed to enjoy his cozy bed immensely and ever so slowly, Valia’s care began to transform Billy’s badly malnourished body.

“I foster a lot and volunteer at dog shelters in Athens but never really watched a dog transform step by step before my eyes,” she said. “It was hard to let go of Billy because he and I shared a miracle,” Valia said.

In Just Two Months, Billy Was Unrecognizable and Beautiful

Billy’s mange healed bit by bit and his hair began growing back. He gained weight, filling out and looking like a healthy boy again. Within a couple of months, he was completely unrecognizable. He looked like a dog again and what a beauty he turned out to be! Billy was adopted by a Greek woman living in Switzerland. Valia had a hard time saying goodbye but is happy that Billy found a forever home with Emma. Emma lets Valia keep up with Billy via Skype, email, and the phone.