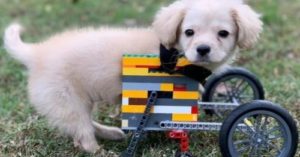 Gracie was just a tiny puppy when she was tossed in the doors of an animal clinic, abandoned by the family she had previously known. Once the veterinarian examined little Gracie, it was clear that she was incredibly unique.

In what appeared to be a congenital defect, was the absence of Gracie’s front two legs. Aside from her missing limbs were the maggots crawling all over her frail body. It was clear that she had been neglected, and lacked the loving attention that she deserved.

Word of Gracie’s condition soon spread to the Executive Director of Mostly Mutts Animal Rescue, Tammy Turley. Once Tammy met Gracie, the rest was history. She knew this little fighter belonged in her family, and she would do everything possible to make up for her upsetting past.

Gracie quickly settled in to the Turley’s home, and made friends with her new furry siblings. Gracie would play right alongside the other pups, as if they weren’t any difference between them!

Each time Gracie moved, her chest would drag against the ground. Her back legs were strong enough to carry her wherever she pleased, but the future discomfort that would come from her odd positioning was inevitable. Though Gracie seemed to manage just fine with her disability, Tammy knew she would need some additional help.

Since Gracie is still a puppy, the purchase of an actual doggy wheel chair would be quite difficult, as she would soon grow out of it anyways. They knew they had to get creative.

Tammy soon recruited a 12 year old volunteer at the Mostly Mutts Animal Rescue, and asked him if he was up for a challenge!

The young boy began his important project of constructing a custom wheelchair for Gracie made entirely out of LEGOS. It’s clear that this passionate young man will be something of a legend in his future, as he created an impressive LEGO wheelchair, including a strap to keep Gracie nice and secure when riding around.

Gracie absolutely thrived in her custom LEGO wheelchair. Experiencing life upright changed this little pup’s world, and she was finally able to the speed demon she always wanted to be. Gracie would zoom up and down the driveway, and all over her home. She was truly grateful for her new set of wheels!

Gracie has now outgrown her first LEGO wheelchair, and upgraded to a new and improved set of wheels. Her original volunteer engineer also made her second set of wheels, which she loved just as much as the first set!

Since Gracie has done the majority of her growing, she now has an official doggy wheelchair.  Nothing can stop her now!

The post This Two-Legged Puppy Has A Wheelchair Made Of LEGOS appeared first on iHeartDogs.com.