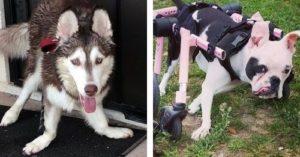 As unfortunate as it is, dogs can also suffer from diseases that deem them physically handicapped. What seems to set them apart though, is their ability to persevere no matter the circumstance! This is especially true for the pups showcased in this article.

The phrase “water on the brain” refers to a medical condition called cerebellar hypoplasia. This is a condition that puppies are born with, where the cerebellum has not formed properly. Since the cerebellum mostly controls motor function, dogs with this condition have a tough time getting around. Dogs may be wobbly on their feet, fall to one side, have difficulties eating and drinking, and may even be unable to walk.

Dogs who suffer from the illness that don’t receive help often have a difficult, or shorter life. It’s a good thing that these pups below found the help of their loving owners when they did!

Clyde is a husky pup that was born with CH (cerebellar hypoplasia.) Though he has some noticeable difficulty getting around at times, his determination to push through is amazingly motivating!

Despite his special needs, his owners knew that Clyde deserved the same amount of love as any other dog. Since they have had him, they have gone to incredible lengths to make sure he has everything he could possibly need to thrive! He has a leg brace for added strength, a special harness to help him get around, and an admiring fan club to help motivate him through!

Clyde’s parents are on a mission to prove that special needs don’t make you any less of a person or pup. They want to get rid of the “Dis” and focus on the “Ability!”

Rosalie has had some incredibly challenging times. From the day she was born, she would flop side to side, unable to find her bearings. As she grew, her mom (a vet tech) realized her condition, and how severe it was.  They began walking her through each stage of her development, inventing new contraptions to help her walk as she grew.

As she grew as a puppy, her owners created homemade wheel chairs and carts to help her move around. As she would outgrow them, they would create another! She is now fully grown, and rolling around in her very own, custom cart!

Rosalie has an incredible parent, who also takes care of other handicapped animals!  They are on a mission to help find homes for handicapped pets in their area, and to end the stigma behind dogs with special needs.

We are so amazed by the resilience of these two extraordinary canines! We can’t wait to see what lies ahead, and how many lives they change by simply being themselves!

The post “Water On The Brain” Can’t Keep These Pups Down! appeared first on iHeartDogs.com.