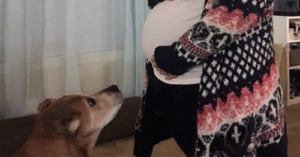 Few people hoping to adopt a dog from a shelter are there looking for older dogs. It’s devastating how these adoptable dogs’ ages can work against them like this. Senior dogs can make for the most wonderful life experiences, no matter how old they are when they come into yours.

If you’re not sure, the story of Beth and Michael Clark and the dog they rescued at 17-years-old will undoubtedly convince you.

In December of 2015, the couple visited Friends Of Anne Arundel County Animal Care & Control in Millersville, Maryland to drop off donation blankets and supplies. They left with far more than they dropped off, in the form of a 17-year-old dog named Rocky.

Rocky had appear as a stray at the shelter six times since 2012. Beth told Today she just couldn’t bear the thought of Rocky living out his remaining days in a shelter.

“I saw this gray-faced, skinny dog and I said to my husband, ‘We’re getting him.’ I was not about to leave that old man to die in a cage.”

He may have been an old dog, but he showed the Clarks how capable he still was of providing unconditional love and support.

Not long after adopting their pup, Beth became pregnant with her first daughter. Rocky was quite literally Beth’s rock as he supported her through late stages of pregnancy.

“Rocky didn’t really notice until I started showing, but he was so gentle with me and he adjusted really well with all the baby stuff coming in. When I wasn’t feeling good, he was always near.”

When the couple officially announced their pregnancy, they let Rocky’s face make the announcement.

As the months went on, Rocky’s health started to decline significantly. At one point, he was rushed to the emergency vet where the family learned he might have a tumor. The last thing they wanted was for their pup to be hospitalized. They wanted him to recover at home, surrounded by love. And he did bounce back.

The day finally arrived for baby Hazel Clark to enter the world. The proud parents brought her home, excited for her to meet her now 18-year-old dog brother.

“He sniffed her and placed his head near her. It was beautiful and I cried.”

After the glorious introduction of dog to baby, Rocky’s increasing health issues became apparent. As dog parents often do, the Clarks knew in their hearts that their beloved dog needed to be put to sleep. They called up a veterinarian right away.

That night, Rocky died peacefully beside his loving family, new member and all. His family believes he used all of his strength to hold on until his new baby sister arrived.

“We loved him more than words can describe and we still have a very hard time adjusting to him not being here.”

Friends Of Anne Arundel County Animal Care & Control shared the most tear-jerking Facebook post about Rocky and his generous adoptive parents after he passed. The post, written in the form of a letter, addresses young Hazel specifically.

“Before [Rocky’s death] happened, your sad mom and dad took a picture of the two of you together. Someday, they will show you that picture, and tell you how wonderful and how loved your first dog was, even though your lives only overlapped so very briefly.”

This old dog, formerly doomed to live out his days in a shelter, made a huge impact on the Clarks’ lives.

“We were more than thrilled to adopt Rocky. Just because he was a senior doesn’t mean he didn’t have a personality. It didn’t mean he couldn’t be a family dog or go out and enjoy the world. Senior dogs are amazing dogs — they may need a little help, but they will love you so much.”

If you need to take a break to compose yourself after reading this story, I’d understand.