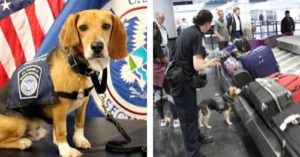 Murray is an impressive dog with a troubling past. Though he may have suffered before, he is absolutely shining in his new position with Homeland Security.

These days you’ll find Murray working the baggage claim area at Atlanta’s Airport, which is one of the busiest airports in the world. If you look at this dedicated pup now, you’d have no idea that just over a year ago he was abused and fending for himself on the street.

Murray was found wondering the streets with part of his ear and tail missing from what appeared to be a deliberate injury. He was terrified, in pain, and unsure of what would lie ahead of him.

Once he was brought to the shelter, his luck changed. He was pulled from the shelter for a very important task, and set off to begin his training for the Beagle Brigade.

The Beagle Brigade is a band of rescued canine officers that sniff out bags carrying meat and plants. Though plants and meat don’t seem that dangerous, they can actually carry pests that can wreak havoc on the economy.

“If that meat (that carries African Swine Fever) gets into the United States, that could devastate the whole pork industry. We’re talking billions of dollars, not just in lost revenue, but also in lost jobs and eradication efforts.” – Joseph Chopko

When Murray first arrived for his training, his handler Amabele Gella was concerned if he’d be the right fit to get the job done. He was in rough shape, and she was worried that his heartbreaking past would affect his work.

K9 Supervisor Ken Hodgkins with Customs and Border Protection states that despite Murray’s past, he is one of their best dogs now.

When you see Murray and the Beagle Brigade at work, it’s clear that they truly love what they do. The Beagles run around and eagerly sniff each travelers bag, and they do so with a mighty tail wag.

Though these canine officers are adorable, they sure work hard to protect the American public.

“It’s very effective, these dogs can find up to 25 seizures a day from different passengers.” – Hodgkins

We are truly impressed by the Beagle Brigades work, and love the fact that rescued Beagles like Murray are getting a second chance at a wonderful life.

Thanks you to the Beagle Brigade and their handlers for working so hard to keep us safe!