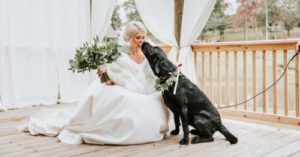 Kristen and Duncan Dupree agreed that their wedding day would be the first time that Duncan saw her in her dress. They knew that some couples preferred to do a ‘first look’ before the wedding, but that wasn’t the path they wanted to take. However, they decided that they wanted their Labrador Retriever named Zeke to be an important part of their wedding day. That decision made Kristen rethink the whole ‘first look’ idea.

There was a time when Kristen and Duncan actually joked about Kristen doing her first look with Zeke. But then, as the wedding approached, Kristen realized that this idea wasn’t so crazy after all. Zeke is their best friend, and Kristen wanted to see his reaction to her in her beautiful dress.

“On the wedding day, I started to get some pre-ceremony jitters and really wanted to see Zeke prior to walking down the aisle,” said Kristen. “Zeke had been hanging with Duncan and the groomsmen all day. My matron of honor went to get him for me and it truly was a special moment for me. In the middle of a busy day of hair, makeup, setting up, and pictures, it was nice to just love on my dog.”

As soon as Zeke came out to see Kristen, he got very excited. He rushed over to his mom and immediately began giving her kisses. She was so excited to receive this kind of love before the ceremony, and her excitement can be seen in all the photos. Kristen even gave Zeke a big kiss in return at the end of the photo shoot.

Farlow Photography took photos of this entire exchange. Despite being different than a traditional first look, it is still extremely heartwarming. It is clear that Kristen and Zeke love each other very much. Many other dog lovers commented on how adorable the photos are.

“My bridesmaids, mother, and mother-in-law were the only ones to see the photo shoot,” said Kristen. “They all had huge smiles on their faces. We are all dog people and they knew how happy I was to see my boy!”

Zeke was an important part of the wedding. Not only did he star in these photos, but he also stayed in the groom’s suite during the reception. He even came out to the dance floor for a special dance toward the end.

Kristen and Duncan are so happy that Zeke was able to celebrate their big day with them. He’s such a huge part of their family, and he goes everywhere with them, so of course, they couldn’t let him miss out on this big moment. Plus, the photos will be memories that the happy couple can cherish forever.

The post Bride Does A ‘First Look’ Photo Shoot With Her Dog appeared first on iHeartDogs.com.