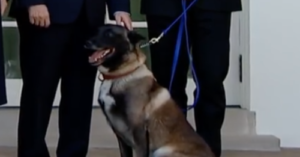 Conan is the special operations military service dog who helped take down Isis leader al-Baghdadi in a raid last month. Her work has earned her special recognition. Introducing Conan as the “world’s most famous dog,” Conan was honored in the Rose Garden of the White House. Conan got very cozy with Vice President Mike Pence, nudging him for head scratches, proving that even the mightiest of dogs want nothing more than love.

When members of 1st Special Forces Operational Detachment-Delta, commonly known as Delta Force, landed outside al-Baghdadi’s compound in North West Syria, al-Baghdadi reportedly attempted to flee. He grabbed 3 children and ran down a tunnel that was a dead-end. Conan’s handler released her to make chase. Upon reaching the end of the tunnel, al-Baghdadi detonated a suicide vest. The explosion resulted in al-Baghdadi’s death as well as the death of the 3 children. Conan was wounded while in pursuit but recovered well and was back on duty the day after her photo was released.

Conan appeared before the press to receive a medal and a plaque. President Trump commented that he “actually believed Conan knew exactly what was going on.” We believe he is right! Conan is a highly skilled, very intelligent service dog whose intuition and understanding of events cannot be overstated. President Trump went on to call her “brilliant,” “so smart,” and “one tough cookie.” Hear hear, Mr. President!

Conan’s regular handler did not appear before the media for security reasons. The leash was being held by a probable secret service agent and of course, Conan’s behavior was pretty impeccable. It seemed pretty obvious that Conan got nothing but good vibes from Vice President Pence, though! Conan kept nuzzling the Vice President’s hand and the Vice President would oblige with a scratch. As soon as he stopped, Conan nuzzled again. It was endearing to both the Vice President and Conan.

“Having this extraordinary dog here today is all a reflection of our armed forces and the great job that they do. Conan is really a hero,” said Pence, while petting Conan’s head. “It’s really a joy to be able to help welcome him here to the White House.”

Thank you Conan for your extraordinary service to the United States!