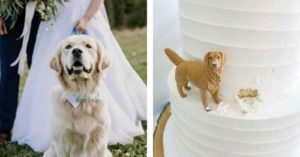 Bear’s parents knew from the start that they had brought a very special pup into their lives. Though they were already engaged when they adopted Bear, they knew they wanted to include him in their special day.

Bear is truly Roisin and Hunter’s pride and joy, and they wanted to take this chance to show him off to all their friends and family.

Bear walked down the aisle before his mom, he was the model on all of their party favors, and they even had a biscuit bar just for him!

If that wasn’t already special enough, the couple decided to include Bear in one more important part of this big day. They reached out to Kake by Darci with an adorable plan to include their best furry friend in their wedding cake creation.

“I told her I had brought a little golden figurine and was wondering if she could put him on the back of the cake as a hidden detail doing something naughty, like dirty paw prints or whatever. She told me she would absolutely incorporate him, and I didn’t actually know what she was planning until I saw it on the day!”- Roisin Bicklmeier

When their wedding day arrived, Roisin and Hunter made sure that Bear looked especially dapper. He walked down the aisle in his custom bow tie, wearing a sign that said “Don’t worry ladies, I’m still single.”

Their guests absolutely loved it, and Bear soaked in every moment!

When it came time to cut the cake, the couple finally got to see their adorable idea come to life. The front of the cake was elegant, and was covered in beautiful white flowers. You would never know what was hiding on the other side.

The back of the cake showcased a tiny figurine of their beloved Bear, and a hilarious scene that showed Bear taking a bite out of their cake.

“I absolutely loved it as Bear would have absolutely taken a bite out of the cake if he had the chance.” – Roisin Bicklmeier.

The wedding made everyone fall in love with Bear, even more than they already did.

Roisin and Hunter couldn’t be happier with the outcome of their big day, and are so happy to see everyone fall in love with Bear the way they have! If you would like to keep up with their adventures, you can follow Bear on his very own Instagram.

The post Couple Finds An Adorable Way To Include Their Pup In Their Wedding appeared first on iHeartDogs.com.