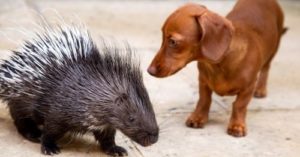 When Diablo the Porcupine was born at Cotswold Wildlife Park in Oxfordshire, UK, his mother was already raising young twins. Not ready to take on another baby, she rejected the little porcupette.

Luckily, park employee Estelle Morgan was ready and willing to take over as a surrogate. She even had a ready-made BFF on hand to keep Diablo company – Dachshund puppy, Fig!

Diablo was introduced to Fig when he was just a few days old. Ever since, the energetic pup has been providing his prickly pal with essential social interactions to help his development.

“It’s safe to say they have become best friends,” Morgan tells SWNS. “When Diablo gets excited he will do a buckaroo-style run, where he thrashes his head around and jumps up in the air. Under close supervision, they will run around the garden together and Fig has been very gentle and patient with Diablo.”

When Diablo was born at the end of July he was “very feisty,” but Morgan says he is learning to be gentle with Fig’s help.

“Now he has settled into a good routine and will comfortably follow me around the kitchen and will even come to me for reassurance.”

When Estelle began hand-rearing Diablo, he weighed just 300g (about 10 ounces). Now he has grown to a strong, healthy 1.8kg (just under 4 pounds).

For the first month, the porcupette was fed one bottle every two hours to get him into a good routine. Now that Diablo is older, Morgan has begun weaning him off the bottle and introducing solid foods – his favorites are apples and sweet potatoes.

“My most stand out moment hand-rearing Diablo was when he latched on and suckled on his own from the bottle for the first time,” Morgan says. “This happened when he was three days old and was just a huge relief for me – the first few days are always worrying.”

Weaning Diablo off the bottle also means that Morgan is getting more well-deserved sleep instead of waking up for late-night feedings.

Soon, Diablo will return to the park to join his own kind, but for now, he is enjoying his time with Morgan and BFF, Fig.

Can’t get enough adorable inter-species friendships? Check out these 18 dogs and their feline, ovine, bovine, primate, and avian pals!

H/T to SWNS
All Images by Tom Wren/SWNS