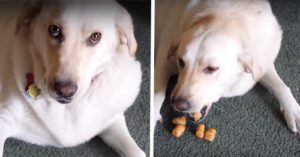 Do you ever feel like your dog is keeping something from you? There’s something off, but you can’t quite put your finger on it? All you know is that something is up, and if your dog could talk, would he tell you what it is?

This yellow lab has such an honest face. There’s not a hint of dishonesty in it, and you can see the moment that his human starts asking, he begins to buckle under pressure. She knows there’s something he’s not telling her, and she doesn’t have to dig in too deep to get to the bottom of it!

It’s not that he wants to decieve her. He was maybe just hungry! Really, really hungry! Specifically, for delicious people food!

Such a sweet, honest pup! He wasn’t sneaking tater tots – he was just keeping ’em warm for her! Before he even spilled his tots, his eyes gave away his surprise.

(Don’t worry, pup. Tots are my weakness too!)

The post Dog Spills His Secrets – And They’re All Tater Tots appeared first on iHeartDogs.com.