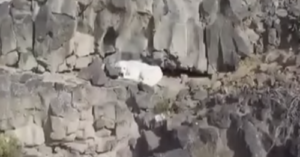 A dog that was later named Clifford was found trapped on a steep cliff in Twin Falls, Idaho. He was reported to have been there for about 5 days, and he couldn’t move because he was scared of falling. On October 13th, Friends Furever Animal Rescue got a call about Clifford and they knew right away that they had to rescue him. Dave Wright and Richard Jensen bravely climbed up to save the scared pup.

When the animal rescue officials came to the scene, they could tell that Clifford desperately wanted to come down. It took a lot of work for them to get up to him, but they were determined to bring him to safety.

There were many other agencies that knew of Clifford’s situation, but they were unable to help. However, Friends Furever Animal Rescue knew they could find a way to make it work. Some of the individuals had experience with rock climbing, so they knew they could use that to their advantage.

“If we’re not there doing it, who’s going to be doing it?” said Wright. “I’ve done years of scrambling, peak scrambling, alpine climbing, things like that. So we went in with safety in mind.”

Getting up to Clifford and safely bringing him down was not an easy task. Even after they climbed up to him, they still had to gain his trust. Then, once Clifford understood that they were there to help him, the rescuers were able to pass him down from one person to the next until he was safely on the ground.

During this rescue, a drone video of Clifford was taken. After going viral on Facebook, lots of dog lovers out there were moved by his story and wanted to donate to help with his vet bills as well as to help him find a family.

Clifford is now staying at a foster home while he recovers from some superficial wounds. Once he’s healed, he’ll be ready to find his forever family. So far, he’s shown great improvements.

“It is an extremely gratifying thing that we do,” Wright said. “It keeps us going to be honest. There’s a lot of stress involved.”

Friends Furever Animal Rescue relies heavily on donations and volunteers. They are always in need of people that are willing to help out and provide foster homes for dogs like Clifford. If you want to help save dogs and make a difference, contact this organization to help more dogs find their forever homes.

Here’s some drone footage of the pup in Bliss before the rescue. Neighbors guess he was there about 5 days and they think he fell. One man climbed down there to give him water and keep him going until Friends Furever Animal Rescue could save him! They’re looking for some help with the vet bill, so if you can help in anyway please get in touch with the rescue.

The post Dog Trapped On A Steep Cliff For Days Is Finally Rescued appeared first on iHeartDogs.com.