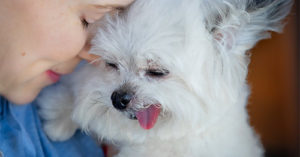 Norbert is a living example of the notion that good things come in small packages. At just 3 pounds, this tiny pooch easily fits in the palms of his dog mom’s hands but his small stature doesn’t stop him from spreading big love everywhere he and his handler go. As a registered dog therapy team, Norbert and Julie have been bringing smiles to those that need it most in Los Angeles for over 8 years.

Julie adopted Norbert when he was just 4 months old. Due to his itty bitty size he was not being housed at a shelter but was made available through Pet Finder. Julie was told that Norbert was a Chihuahua and Yorkshire Terrier mix, which was a good guess based on Norbert’s size and appearance. Two years later a dog DNA kit showed that Norbert was actually a Chihuahua, Cairn Terrier and Lhasa Apso mix. In 2019, another DNA test was performed that came back with different results. This time, the tests showed that Norbert was a Chihuahua and Small Poodle mix. Whatever breeds came together to form this adorable bundle of pup, the results were perfection. And Norbert was the only puppy in his litter making him a truly one of a kind.

Norbert Was Born to Bring Smiles to Faces

Julie noticed very early on that Norbert had a gift for making people smile. He didn’t have to do anything other than be himself and people couldn’t help but feel happy and good in his presence. One day, Julie and Norbert were in an eyeglass store in Boston when one of the clerks commented that Norbert would be a wonderful therapy dog. At the time, Julie was not sure what a therapy dog was so she went home and started researching. After spending time training Norbert herself, the duo applied for their therapy dog certification and the rest is history!

Everyone who helps Norbert spread smiles is a part of the growing Norberthood, which is reportedly 2 million strong and growing. Norbert has been a central character in two children’s picture books, a photography book, and a highly anticipated 2020 calendar. A plush toy was designed in his likeness which sold out quickly. Norbert and Julie regularly give back, donating proceeds from book sales to organizations that help special needs pets and volunteering their time to live up to their mission of spreading smiles and inspiring kindness.

You buy one, I give one (the plush, not the real me!) click my bio link to pre-order 🙌 #ToysForTots

Want more Norbert? Of course you do! His fans can follow his adorable and meaningful life on Instagram, where his handle @norbertthedog has nearly 850k followers.