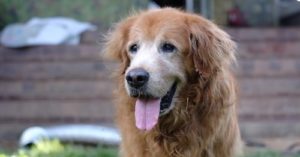 What would you do to help all dogs live longer? Would you fill out surveys about your pooch? Send in DNA samples and vials of poop?

Scientists for the Dog Aging Project certainly hope so. They’re counting on 10,000 dog lovers to volunteer their pups for a five year study on canine aging.

The project is the largest-ever study on how dogs age. It will rely on pup parents to provide data such as veterinary records, DNA samples, gut microbes (from poop samples), and information on diet and walks. Owners will also be asked to fill out periodic surveys, as well as take their dogs for yearly vet visits.

All canine volunteers will live at home and follow their typical routines. The researchers hope to enroll purebreds and mutts of all ages and sizes, so just about any dog is eligible.

The National Institute on Aging will foot the $23 million bill for the study because the results may also benefit humans. For example, a genetic marker for a type of cancer in dogs could lead to important research in humans.

Five hundred dogs will also test a pill called rapamycin, taken by humans to prevent kidney transplant rejection. The drug has proven to extend the lifespan of mice, and could slow the aging process in dogs.

Since large dogs have shorter lifespans than smaller dogs, only pups weighing at least 40 pounds will be eligible for the rapamycin study. According to project co-director Matt Kaeberlein of the University of Washington, a safety study in dogs found no dangerous side effects with the drug.

To nominate your pooch, visit the Dog Aging Project’s website.