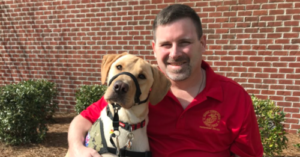 If you didn’t already know, part of each sale on the iHeartDogs.com store is donated to GreaterGood.org, which offers grants for charities and programs like Canines For Service.  Customers like you are the reason heartwarming stories like this one are possible!

Canines For Service’s Canines for Veterans initiative works with U.S. Veterans to help them regain stability in their lives following their service. Thanks to a grant from Greater Good, Veterans and former shelter dogs are matched through this program to improve both human and canine lives.

Greater Good’s Pets for Vets page emphasizes the importance of supporting organizations like Canines For Service that help both U.S. veterans and shelter animals.

“Both our veterans and shelter animals have been through traumatic events, but together they can help each other heal. When a Veteran is matched with the right pet, both lives change for the better. The Veteran saves the animal and welcomes him/her into a loving home. The pet provides unconditional love and support, easing stress, depression, loneliness and anxiety. “

Allen committed over 20 years to serving his country with the Marine Corps. He was deployed many times and also sustained several lasting injuries during his service. As a result, day to day tasks like mobility became difficult for him. He also suffers from PTSD.

Allen’s physical and mental health prevented him from doing things as seemingly simple as picking up dropped items. Going out with friends was even too much for him. He would sit in the car while his wife did the grocery shopping. Unfortunately, the consequences of his work for his country were profound.

With the help of service dog named Marcus, all of that has changed for Allen.

Marcus, a Yellow Lab mix originally found and rescued as a 1-year-old stray, spent a year training to help people. And he excelled at it! This pup is a real people pleaser and a hard worker. He genuinely enjoys having a job. Isn’t that refreshing?

During the week the two spent training with each other, Allen fell in his hotel room. In an instant, Marcus ran up to him and stood as a brace to help his person get up off the floor. And that was just the beginning.

Thanks to Marcus, Allen now lives without fear of his disabilities getting the best of him. He’s even going out to dinner with friends and helping out with the shopping now.

The pair has only had a few months together, and already it’s changed them both for the better.

If this story made you feel good, consider making a supporting purchase in the iHeartDogs.com store or donating to pair a veteran with a dog today!

The post You Helped An Injured Veteran And A Stray Turned Service Dog Find Each Other appeared first on iHeartDogs.com.