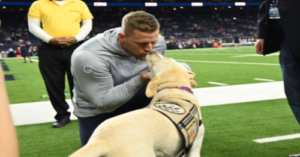 Well well well, if it isn’t everyone’s favorite Presidential service dog Sully back in the news again! Yep, surely you’re all very familiar with the famous Lab by now. We’ve featured him a few times before on iHeartDogs.com.

Sully acted as a service dog to the late 41st President of the United States, George HW Bush. When the President passed in 2018, a beautiful photograph of Sully lying down in front of the American flag-draped casket went viral.

Sully’s been front page news for a while now as a bronze statue of him designed by artist Susan Bahary just went up in George HW Bush’s Presidential Library in College Park.

These are both great pictures of a good boy obviously, but my personal favorite Sully photograph is one taken before this past Sunday’s Texans/Patriots football game. It features Texans Defensive End J.J. Watt with Sully on the sidelines.

The Houston Texans Twitter account tweeted the photo, which shows the player getting very familiar with the pup.

If anyone deserves a V.I.P. meet-and-greet pass and photo-op, it’s Sully! The heroic dog even got to hang out with the team’s mascot Toro, who gave the experience a much stronger rating (41/10 to be specific) via Twitter.

This is Sully. He was President George Bush’s service dog before his passing. 41/10 will pet again.@dog_rates | @AmericasVetDogs pic.twitter.com/e9Y25leotc

Even a hardworking dog like this likes to support his team! And the team supports him right back.

Here’s a quick summary of everything you should know about Sully: