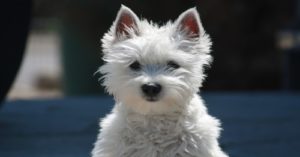 It’s horror stories like this one that make it impossible for me to leave my dog in the car, even for just a minute or two. At around 8am on the morning of December 2nd, two dogs in Staffordshire became incidental kidnapping victims. Both of the pups were inside of a stolen car.

Not too long afterwards, police were able to recover one of the dogs. The other was still inside the missing car. The East Staffordshire Police appealed to the public for help locating the car with the poor dog inside.

“The other was in a maroon coloured soft cage in the boot of the vehicle. The dog is a white West Highland Terrier, please let us know if you see the vehicle or the dog.”

Without fully explaining how, East Staffordshire Police announced in a tweet that the Westie had been found. The car remained unseen.

“Thank you for sharing…..the dog that was taken along with a vehicle in Uttoxeter has now been reunited with its owner….East Staffordshire Police and the owner of the West Highland Terrier cannot thank you all enough, the power of social media can be amazing!!”

Though it may seem to the reader like a brief resolution, I can’t help but imagine how long it felt to the dog’s person. Either way, people and pups are back together again and that’s good news!

Sadly, this type of incident is not completely unheard of. Dogs are occasionally victims of stolen cars, though usually not the intended targets. This, among other safety concerns, is one reason why leaving your pup alone in the car for too long is not advised.

According to data reported by Direct Line Pet Insurance, 1959 dogs were reported stolen to UK Police in 2018. Staffordshire Police recorded one of the highest numbers of dogs thefts, with 71 stolen in 2018. That, along with every nonzero number, is too many! Here are a few tips in the terrible event your dog gets stolen or goes missing.

Though I’m willing to bet after reading this, many of you won’t want your pups out of your sight for awhile.

The post Westie Left In Back Of Stolen Car In Staffordshire Recovered appeared first on iHeartDogs.com.