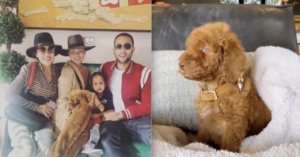 Chrissy Teigen and John Legend happily introduced a new family member on Instagram, but he wasn’t what fans expected. Instead, he was a sweet rescue puppy named Petey.

The couple became aware of Petey because of a post that Ellen Degeneres shared on Instagram. Petey was rescued by The Wagmor Luxury Pet Hotel & Spa, which is where Degeneres adopted her dog, Wally, from.

Petey arrived at Wagmor with his parents and 7 siblings after being abandoned. All the dogs appeared to be purebred Standard Poodles, but they were in desperate need of a home. The adorable puppies stole the hearts of many Instagram followers, so many dog lovers wanted to rescue them.

“For those of you who really want to rescue a dog, but really want a purebred, know that you can rescue a purebred dog. They have them at rescues,” said Degeneres. “So, don’t use that as an excuse.”

Petey and His Dog Family

Degeneres initially shared a post from Wagmor asking for donations. The family of 10 dogs had recently arrived at the rescue, so they needed all the help they could get. Luckily, many kind people donated to help these dogs in need.

Since Wally was also from this rescue, Degeneres felt that these dogs were like family. Degeneres rescued Wally a few months earlier after the pup had been saved from a neglectful situation. These dogs deserved the same happy ending as Wally.

“This is our dog Wally’s family,” posted Degeneres. “They all need homes. PLEASE help if you can.”

Teigen and Legend saw this post and immediately wanted to help. They decided that a rescue puppy was exactly what their family needed. So, they reached out to Wagmor to find out if they could adopt one of the pups.

A Home For the Rescue Pups

The couple adopted Petey once he was healthy and ready to leave the rescue. They named him Petey after the parakeet from the movie Dumb and Dumber. The family has already fallen in love with the little pup after only a few days.

“Welcome to the family, Petey!” posted Teigen. “Thank you @theellenshow and @wagmorpets for making us aware of this adorable little rescue family. This little guy grabbed our heart first and will hold onto it forever!”

Teigen has already posted lots of adorable pictures and videos of the children with their new family member. Petey seems to have settled in already and he even has an adorable new collar with a bow. It’s clear that he’ll be well-cared for in his new home. Teigen and Legend are extremely kind for choosing to rescue a puppy in need, so hopefully more celebrities will choose to adopt instead of shop too!

welcome to the family, petey! thank you @theellenshow and @wagmorpets for making us aware of this adorable little rescue family. this little guy grabbed our heart first and will hold onto it forever!