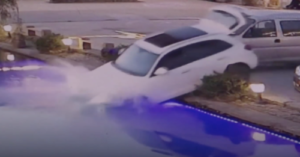 Sometimes you have to make a big mistake for an important lesson to really sink in. Hopefully that’s how the owner of a runaway vehicle in China feels now. He made the mistake of leaving his dog in the car (albeit momentarily) with the engine running, and the results were… well, pretty much what you’re expecting.

At around 5:40 pm on December 10th, a local shopkeeper momentarily parked his car in front of a pond in Xinguang Village, Jinhua, Zhejiang Province. The [human] driver planned to quickly run his errand and return to the car, so he figured it was probably okay to leave the engine running and the trunk open. He really underestimated his dog. The dog somehow knocked the gearshift into drive, he said.

“I was preparing to leave but realized I had left my wallet and a box of products behind. I opened my boot so I could load the goods when I came back. While I was walking back, my dog saw me and jumped up because it was very exciting. It somehow shifted my car into gear and drove it into the pond.”

Was it on purpose? Was it a consequence of excitement? Unfortunately we’ll never know. What we do know is this: The dog is just fine. His person probably (or at least hopefully) learned never to trust him with a running engine again.

“After the car was driven into the pond, nearby villagers helped save my dog. I’m very grateful to them.”

In the video, the dog’s person doesn’t even look that mad, more just helpless and amused. We can’t really see the dog’s face, but my guess is unaware wagging tail and panting tongue.

Here’s the video in full for your viewing pleasure:

Hopefully the driver’s premiums weren’t too affected by his excited doggie passenger’s oopsie.

The funniest part about this to me is that this is not the first story I’ve written about a dog behind the wheel. Recently a pup in Florida accidentally drove a car in circles for hours in its residential neighborhood (that dog was fine too.)

I wonder how many more of these incidents it’s going to take for people to stop leaving their pups inside the car! As we can see, they’re not really the world’s best drivers. But they’ll always make great passengers and road trip buddies!

The post Dog Rescued From Pond After Driving Car Into Water appeared first on iHeartDogs.com.