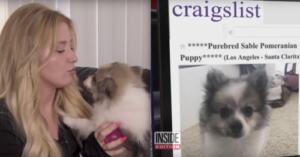 When Ashley Farley came home one day to find that Ella, her Pomeranian puppy, was missing, she was horrified. Ella was only a few months old, but Farley had bonded with the little pup in no time. In fact, she was so close to the little dog that her boyfriend had become extremely jealous. Farley soon found out that her boyfriend was the reason Ella was gone. He had sold her beloved pup on Craigslist out of spite!

Ever since Farley brought Ella home, her boyfriend of 3 months had been upset about it. He could tell that Farley loved Ella more than him, which drove him insane. So, when Farley asked him where Ella was, he answered honestly.

Her boyfriend bluntly told her that he sold Ella on Craigslist. Then, he broke up with Farley right after. She said that he had the most spiteful look in his eyes when he broke the news to her. Farley wasn’t upset about the breakup though. Her horrible ex had gone too far! All she wanted was her sweet puppy back.

“Trying to find a new home for my gorgeous little princess,” her boyfriend posted on Craigslist. “Just got a new job, so I have to move across the country and my new place does not allow dogs of any kind.”

Of all the terrible ways to break up with someone, this was without a doubt the worst. Coming between a girl and her dog is an unforgivable action.

The Search for Ella

Farley’s ex hadn’t lived with her, but after their breakup, he decided to move away. He lived in California near Farley, but he ended up moving back to his home state, Florida. After he left, he sent Farley a video of Ella playing with another dog in her new home.

“I felt like a hole had been punctured through my heart, like part of me was missing,” said Farley.

She watched the video of Ella closely, but she couldn’t find any signs of where her puppy was now. However, she refused to give up. She knew that she could get Ella back if she kept looking.

Luckily, the family that purchased Ella saw Farley’s story on the news. As fellow dog lovers, they knew that they had to do what was right. So, they returned Ella to her rightful home without asking for anything in return.

“They were the nicest couple,” Farley said. “They got attached to Ella but they said it was the right thing to do.”

Now, Farley and Ella are together once again. Farley wants to find a way to show her gratitude to the kind couple that returned Ella. The love between a girl and her dog is something that should never be messed with. Farley will be extra careful with who she trusts from now on.

The post Man Sells His Ex-Girlfriend’s Pomeranian On Craigslist appeared first on iHeartDogs.com.