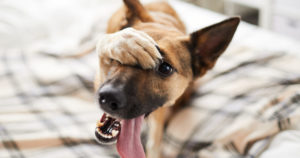 Civilian handlers of service dogs are continually faced with scrutiny and probes from the general public. Even when their working dogs are clearly labeled with a vest informing people to leave them alone, some people insist on distracting the dogs from their work. A team training in a mall recently had an encounter with a woman who wanted her children to be able to pet the service dogs. What part of “Do Not Pet” is so hard to comprehend?

Can My Kids Pet Your Dogs?

At a mall in Pittsburgh, a team of handlers and service dogs were training. From the video it appears that there are at least two handlers, one being the owner of the service dog training organization and the other being a trainer or handler in training. They were approached by a mother whose children wanted to pet the dogs. The mother asked the handler if her kids could pet the dog and she simply answered, “No.” Well, the mother wasn’t happy with the way the answer was delivered.

The mother becomes increasingly agitated and aggressive, arguing that they should have a sign. This is laughable because of course, the dogs DO have a sign. They are wearing a vest that very clearly and simply states, “Do Not Pet.” I guess that is either not clear or complete enough for this mother who would prefer the handlers manage training new dogs in a crowded public space AND carry large signs that broadcast what they are doing. The fact is, any reasonable person can conclude that these are working dogs and anyone who can read on a Kindergarten level can clearly see that the dogs are not to be pet.

I Don’t Owe You Anything

The mom continues to go on about how the handler answered her request to let the children pet the dogs, saying that she should have been nicer. She should have said, “no, they are training” instead of simply, “no.”  The handler answers this point perfectly stating, “I don’t owe you anything.” Hear, hear! The mother gets even madder when she discovers that she is being filmed and states that it is against the law to do without her consent. She threatens to call her lawyer and storms off.

What strikes me as interesting about these stories that you see time and again is that the harassment is always aimed at civilians with service dogs. If those dogs were being handled by a police officer or military person, that mother would have kept her distance. Why does she feel she has the right to interfere with service dogs that are working for people in street clothes?

Service dogs are a common sight. It’s high time that everyone learn to keep their distance and let service dogs do their job. I am doing my part in my own home, teaching my young children that service dogs are not pets and therefore, should not be petted. How do you approach this subject with your kids?

The post Mother Has A Fit When Told Her Kid Can’t Pet Service Dog appeared first on iHeartDogs.com.