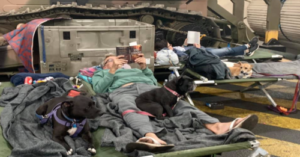 For hundreds of Australians forced to flee from their burning neighborhoods, evacuating without their dogs could never be an option. They wanted their furry family members with them, safe and loved like always. Fortunately the HMAS Choules Navy ship that sheltered over 1,000 displaced people welcomed their collective 135 dogs aboard as well.

Mallacoota is one of the areas hit hardest by the bush fires. Many homes have been destroyed. Cassandra Smith, who vacations annually in the coastal city, boarded the ship in late December with her husband and their Labrador Lexi, according to Storyful. The vessel had been set up to accommodate both the human and four-legged refugees.

“The Navy set up makeshift containers and pallet boards as pens for the dogs. There were 135 dogs, 2 cats, 2 birds and a rabbit – not all in the same area, thankfully.”

The community had been briefed by the CFA, told that if fire sirens sound they must evacuate right away, Smith said. Suddenly, that time came.

“We left our campsite and were in boats, wearing long sleeved cotton shirts and hats to protect ourselves from falling embers. We also had food for the three dogs between us. On New Years Eve morning the sky went black with smoke and then red. We could hear gas bottles exploding and houses burning. People didn’t know what was happening.”

On New Year’s Eve, no one was celebrating. Instead, they were focused on surviving. Smith in particular suffers from asthma. She initially went to Far Saracen Esso Oil ship for treatment after New Year’s. Later she transferred to the HMAS Choules with her family.

“The stories on the ship were gut wrenching. So many people had lost their homes and were on a ship to a city they didn’t know.”

Despite the horrifying circumstances, many praised the crew and servicemen and women that offered their assistance to stranded people and animals.

“We evacuated on the HMAS Choules on Friday. The ship kindly set up the vehicle bay for pets and their owners throughout the 30 hours. Here are pix – it’s amazing how pets bring out our humanity.” – Kristine Daniels via Facebook

This video gives you a pretty good idea of what things looked like on the ship:

If you want to help out the people and their animals affected by the Australian bush fires, you can give a donation here.