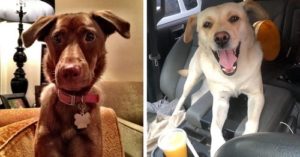 Meadow and Bella are two of many dogs that went missing around the holidays. What sets them apart is the incredible support their respective communities provided in helping to bring them home.

The city of Birmingham, Alabama rallied around Atlanta resident, Lauren Johnson when her dog Meadow became lost. Residents of Charleston, SC did the same when a Yellow Lab Mix named Bella was stolen along with her owner’s truck.

Their efforts eventually resulted in both dogs being recovered. Sadly, the outcomes were quite different. While one was found alive and well, the other did not survive her ordeal.

This Christmas Lauren Johnson and her 8-year-old rescue pooch, Meadow drove from their home in Atlanta, Georgia to a Birmingham, Alabama suburb to visit Johnson’s sister.

The plan was to head home on December 27, but that all changed on the afternoon of the 26th. Johnson and her sister were headed out to run errands when Meadow somehow escaped from the house. The dog followed the car’s scent for half a mile before becoming lost in the strange city.

After several hours of fruitless searching, Johnson turned to Facebook for help. She posted photos and a description of Meadow, begging the community to share her post far and wide.

Birmingham came through in a big way.

Over the next several days, Johnson’s post was shared more than 2,000 times and new “Find Meadow” posts also popped up in the thousands.

Johnson and her army of volunteers tried everything to locate Meadow and lure her back to safety. They organized searches, posted flyers, and sent Meadow’s description to area shelters and vets. A pair of Johnson’s old pajamas were cut up and strips were tied to stop signs leading back to the house.

They even set up “scent lures” across the search zone. As AL.com explains:

The lures consist of a plastic box covering a piece of the cut pajamas and meat. There are 10 lures set up in an “L” shape, designed to lure Meadow to a populated area.

In the 10 days following Meadow’s disappearance, Johnson logged more than 90 miles on foot, her pockets jammed with flyers, salami (the dog’s favorite), a leash, and Meadow’s “baby” – a stuffed leopard toy.

Just after Johnson returned to Atlanta heartbroken and without her beloved dog, a promising lead came in. A woman had spotted Meadow in the woods behind her house and kept her in the area with the smell of fresh-cooked bacon.

Johnson rushed back to Birmingham and was soon reunited with Meadow! The dog was covered in ticks and had a few scratches, but was otherwise perfectly healthy after her 12 day ordeal.

On December 22, the pair pulled up to a North Charleston, SC Lowes Home Improvement Store. Brengle left the engine running as he ran inside to buy lumber. Normally Bella would have gone inside the store with him, but it was cold and rainy so he left her in the truck with the heat running.

He parked close to the entrance and was only gone three minutes, but when Brengle returned, the truck – and Bella – were gone.

Speaking to local news sources, Brengle announced that the thief was welcome to keep his truck if he would only return Bella. He described the shy rescue dog as “very skittish,” with a “broken tail” and “pink nose.”

“She just sticks by my side, which is the hardest part, you know, that she’s out there alone. She’s got to be so scared, petrified,” Brengle said, according to WCIV-TV. “My family, myself, we’re all going through it. We all love her so much, but I can only imagine what she’s going through without me, without us.”

Brengle took to the streets, riding his bicycle and asking people if they’d see Bella. He created Facebook and Instagram pages devoted to the search for Bella.

He even offered a $10,000 reward for her safe return as well as a $5,000 reward for the arrest and conviction of the person responsible for taking her.

“Bella is out there somewhere,” Brengle said in an interview with The Post and Courier. “Please help by spreading the word, actively looking online, and paying attention in your own neighborhoods. There is no distance too far that we will be looking. It starts local, and will spread out over time.”

The citizens of Charleston responded in droves, More than 7,700 people followed the Find Bella Facebook page and his posts were shared hundreds of times. A second Facebook group was created to organize volunteer searches.

Bella’s face was shared in lost pet groups across the state and several leads were sent his way. Unfortunately, none of the yellow dogs were Brengle’s yellow dog.

The search for Bella came to an end in the early morning hours of Sunday, January 5 when Brengle discovered her body down a highway embankment.

The man who stole Bella along with Brengle’s truck is in custody facing several charges, including theft of a dog. In honor of Bella’s memory and the people who stepped up to search for her, Brengle has changed the Facebook page from Find Bella to Change for Bella. He hopes to help others reunite with their lost dogs.

While these two stories have very different endings, they both show how one dog can unite an entire community. For the people of Birmingham and Charleston, Meadow and Bella were their dogs. In response, they did exactly what they would want their neighbors to do if their own pooches were missing.

Find out how you can help lost dogs in your community find their way home again.