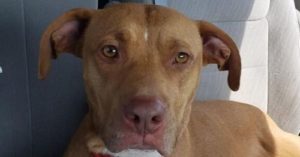 iHeartDogs works closely with GreaterGood by donating part of each sale to their various charity efforts. One of the charities, Rescue Bank, works to donate quality dog food to shelters and rescues who are in need. Some organizations could not run without the kind donations from organizations like this, and that’s why your donations are so appreciated.

The Toledo’s Pet Bull Project received a distressed phone call from a volunteer about an emaciated dog found near the railroad tracks. She appeared to be incredibly underweight and had something hanging from her abdominal area. Once the Pet Bull Project team arrived, it was clear just how badly this pup needed help.

This abandoned pup had substantial mammary tumors that had been taped up with paper towels. In addition to her mammary masses was the severe emaciation that she was facing, making her situation even more serious. It was clear that she had been neglected or abandoned by someone and was in desperate need of some loving support. This sweet girl was immediately taken in by the Pet Bull Project where she was lovingly named Hattie.

Hattie then received the emergency veterinary care that she so badly needed, and underwent surgery to remove her mammary masses. Hattie was finally free of the painful infection that had caused her discomfort for so long, and in turn began to gain some much-needed weight.

Hattie has now been spayed, vaccinated, and is beginning to look like a healthy fur baby again! Now that she’s finally feeling better, she is beginning to come out of her shell.

“Since I’m finally healed up my foster mommy has been working on basic obedience commands. I know how to sit. I’m also potty trained. I like to go for walks but I am a strong girl and I’m still learning how to walk nicely on a leash. I’m good in my crate. I’d much rather curl up on the couch with my foster mommy but I’m not allowed to be out and about the house when no one is home. You might have to trick me with treats to get me to go into my crate but I won’t try to escape. I don’t bark or howl when I’m in there. I might whine a little but not for long. You might hear me snore once I’m really comfortable. I’m learning how to play, but most times I run past the frisbee. I just get the zoomies when I’m really happy.” – Pet Bull Project Facebook

Hattie has blossomed into a wonderful pup that is so grateful to be in a loving home. It’s such a shame that she’s just now getting her chance to shine, but her future is bright with the Pet Bull Project on her side.

“Having food and supplies for these dogs in our program is so important. It allows us to spend funds on medical care and help more dogs. GreaterGood.org’s Rescue Bank is a blessing to us.” – Pet Bull Project

We are so thankful for rescues like the Pet Bull Project that continue to fight for dogs like Hattie, and can’t wait to watch her flourish in the future! If you are interested in giving Hattie a forever home, you can contact the rescue here.

The post You Helped Hattie Transform From An Ill Street Dog To A Lovable Pup That’s Ready For A Forever Home appeared first on iHeartDogs.com.