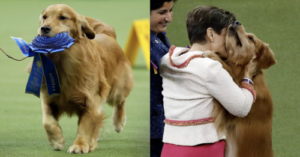 It’s no secret that all dogs are good dogs. But sadly, at the Westminster Dog Show, only one dog can truly be the “Best in Show”. At the 144th Westminster Kennel Club Dog Show, Siba the Standard Poodle was crowned the winner. While there’s no doubt that Siba is a good dog, fans were cheering on one of the other contestants instead. Viewers everywhere were encouraging Daniel the Golden Retriever to make history.

While Golden Retrievers are one of the most popular breeds out there, they’ve never won “Best in Show” at this competition before. However, this is the 5th year a Poodle has won. Daniel was the winner of the Sporting category this year, which is the first time a Golden Retriever has won since 2006. Fans thought this could be the year that this amazing breed finally won big.

What Makes Daniel so Amazing?

Besides being adorable, Daniel won over many fans due to his lovable personality. He has so much energy, and he truly looked happy to be at the show. Plus, he was the only dog to hug his human when he won. What could possibly be better than a dog showing so much love and affection toward his handler?

However, the way dog shows work isn’t just about who’s the cutest and most lovable dog. Sadly, it all has to do with the breed standards. The judges have to evaluate which dog is closest to the “ideals” for their breed. So, they decided that Siba was better at being a Poodle than Daniel was at being a Golden Retriever. It doesn’t seem fair at all!

The concept of having an “ideal” for each breed is unfair to dogs everywhere. Every dog is different and unique, so why should they be expected to behave in such a particular way? If it were up to the dog lovers around the world, Daniel definitely would’ve been voted the best dog in this situation.

The Real Winner of the Show

Technically, Siba is the official winner of the 144th Westminster Dog Show, but that hasn’t stopped fans from disagreeing. Social media has blown up with comments about how Daniel was robbed. Everyone seems to be on the same page when it comes to who the real winner of the show is.

Even during the show, fans cheered on Daniel more than any of the other dogs. He received so much love and it’s clear that he was very grateful for it.

While Daniel wasn’t the official winner this year, he gained much more popularity than Siba, which is honestly even better. He’ll always be the true winner in our hearts. He helped prove that breed standards aren’t what’s most important, but instead, a dog’s lovable personality is.