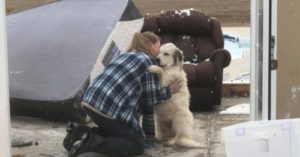 Bruce and Ona Dunlap were watching the news in Logan County, Arkansas about a storm brewing in the area when the electricity suddenly went out. Little did they know, their lives would drastically change within the minutes to come.

With their source of weather updates now turned off, Bruce stepped outside to surveillance the area outside of his home. As he stepped outside, he noticed how eerie and silent it was, to the point that he assumed the storm has passed them by.

“He said ‘It’s awful quiet outside and there’s no wind — there’s nothing out here,’” I then said ‘Oh yes there is. Get to the storm shelter now.’”  – Julie Moore, a close friend of the Dunlaps.

After the warning from Julie Moore, the couple began to prepare for what was heading toward them. Ona set off to her handicapped neighbor’s house to help him get to their storm shelter, as Bruce began to gather the family pets.

Bruce struggled to find the couple’s four cats and two dogs, as they were likely terrified of the impending tornado that animals often sense. Within those short minutes that Bruce had to gather his furry family, he was only able to find 4 of them. This left their family dog, Dasha, and their cat Lady Bug, hiding somewhere within the home. He had no choice but to abandon his search and take cover as the tornado closed in on his home.

“Bruce didn’t know what to do … by the time he got to the storm shelter he could barely get the door to shut.” – Julie

The tornado came and went within seconds but brought with it incredible destruction. The tornado tore the roof off the Dunlap’s home, as well as scattered their belongings around the property. By the time they emerged from the storm shelter, they didn’t even recognize their home.

The couple searched the area extensively that night for their missing pets, but they seemed to have vanished. They had no choice but to abandon their search that evening and return in the morning at daylight and hope for their pet’s return to the home.

The next day, the Dunlap’s and a few friends went back to the house to search for Dasha and Ladybug. Before they knew it, a furry figure emerged from the rubble, as if she had been waiting patiently for their return. As Ona and Dasha were reunited, Julie Moore captured the wonderful moment.

Now that Dasha was found unharmed, it was time to turn their search toward little Ladybug. It was as if Ladybug heard her loved one’s voices in the distance, as she made her way back to the home as they continued to call out for her. Ladybug was soaking wet and covered in sheetrock, but she was otherwise okay. Every single Dunlap was now accounted for, and they couldn’t have been more thankful.

While the family has a long way to go before life seems normal again, they are incredibly thankful for all that they still have. The Dunlaps and their beloved pets are safe and sound, and that’s what’s most important.

The community has since come together to help the Dunlap family in the aftermath of the destruction of their home and is offering support in any way that they can. We are sending our love to Ona and Bruce during this difficult time!

The post Dog Is Reunited With Family After Tornado Suddenly Destroyed Their Home appeared first on iHeartDogs.com.