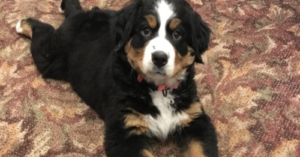 Therapy dogs have the gift of delivering comfort and security during scary, difficult, and overwhelming times. Their efficacy at soothing sick, traumatized, and grief-stricken souls is well documented. Macon Funeral Home in Franklin, North Carolina recently added a therapy dog in training to their grief support staff. They expect Mochi to bring comfort to grieving families for years to come.

An Idea That Was Immediately Embraced by Leadership

Tori McKay is an office administrator for Macon Funeral Home. For 10 years she has been considering the prospect of incorporating animal therapy into her work in grief support. This January ushered in a new decade in her life and she felt compelled to make the leap. Tori consulted with the leadership team at the funeral home where she works, presenting evidence around animal grief therapy and her commitment to caring for the home’s therapy dog in and outside of the funeral home. Management immediately embraced the idea and gave her the green light.

Mochi is a Therapy Dog in Training

Tori and her husband adopted a Bernese Mountain Dog and named her Mochi. Tori chose the breed because, “The Bernese Mountain Dog is a very loyal, affectionate and gentle animal, and has always been my choice for a potential grief therapy dog. They have a history of being excellent therapy and support dogs, which comes from their kind disposition and laid-back personalities.” Mochi will be properly trained and certified as a therapy dog once she is old enough. At just 8 weeks old, her dog mom Tori is working with her at home and at the funeral home on socialization and basic obedience training.

Mochi is Already Making a Difference

Tori understands that the life expectancy of Bernese Mountain Dogs is short at just 6-8 years. This is not unusual for giant breeds. Tori wants Mochi’s life to be as purposeful as possible and she is already getting started. Tori publicly invited members of the community to come by the funeral home and meet Mochi, who “loves making new friends.” After announcing that Mochi was a part of the Macon Funeral Home team, Tori received requests for grief therapy and a hugely supportive response from social media. Moving forward, Tori will be making Mochi available to families upon request to work funeral visitations or be present during grief therapy sessions. Tori also plans to bring Mochi to work at nursing homes a few times a month.