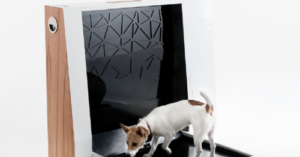 Truly there has never been a better time for innovations in dog potty technology. Recently, I told you all about the [still in-development] dog poop scooper robot Beetl. Here comes the latest defecation technology for pups: an indoor “smart toilet!”

That’s right, there’s finally a major upgrade from pee pads in the works. According to designers Newtons Box, the product known as INUBOX gained major attention at the CES technology trade show in 2019.

“On January 2019 we launched our first design product INUBOX at the world’s largest tradeshow for consumer technology. We presented the First Fully Automated Dog Toilet: A revolutionary station that captures, processes and contains liquid and solid dog waste. CES2019 exceeded our expectations and the answer from the audience was overwhelming…”

Their March 2019 Kickstarter campaign got funded in just 5 hours. 89 backers pledged $40,240 to make this thing happen.

The machine’s sensors detect the difference between your dog standing on it and the waste left behind. A description on the Kickstarter page succinctly sums the INUBOX up:

“Clean, smart, heavy-duty & modern design. INUBOX captures, processes & contains liquid and solid dog waste in a hygienic way. After each use, it releases a treat for your dog’s training. Our patented process prevents bad odors & delivers an eco-friendly sealed bag for disposal.”

Once your dog finishes relieving itself, the INUBOX will close its door to start cleaning waste. Since we usually reward our pups for going in the right place, it even dispenses a treat. There’s also a fragrance dispenser to cover up stinky odors.

The INUBOX’s design is meant to help it blend in to your living space without looking tacky or out of place.

This “smart toilet” should be especially good news for anyone living in a place where walks become seasonably unbearable. No more freezing or sweating while waiting for your pooch to sniff out just the right spot!

While the smart toilet doesn’t replace your pup’s needed walks and exercise, this will make for a nice bad weather or emergency solution. Remember to not get too comfortable with letting your pup relieve itself indoors. They still need to get their little hearts pumping!

When Can I Buy One?

Before you get too excited, no, you can’t order one yet. But with the crowdfunding money hopefully this project gets completed sooner rather than later. For now, we’ll have to keep checking the Kickstarter and INUBOX website for updates on its release.

Check out a video of the product in action here!

The post Soon Your Dog Could Be Pooping In This “Smart Toilet” appeared first on iHeartDogs.com.