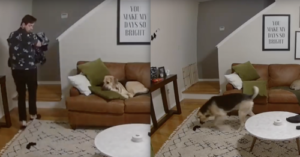 Life would be much easier if our dogs helped out with chores from time to time, but unfortunately, most pups would much rather sleep. Some dog parents even occasionally talk to their dog as if they’ll respond and agree to help out, but that usually doesn’t work. However, a recent video went viral on social media because one smart dog decided to step up and help his dad. He decided to help out with the laundry!

The video starts out with two dogs, Jonsi and Kiya, lounging on the couch. Jonsi watches as his dad, Trey, walks by with his arms full of clean laundry. Kiya just continues to sleep, but Jonsi’s attention is focused on Trey.

As Trey nears the stairs, a sock drops from his massive pile of clothes. He looks down at it, but then keeps going. Obviously, it’s hard to pick up one tiny sock without dropping even more clothes. However, as he walks up the stairs, he decides to try to get some help.

“Jonsi, will you grab that sock and bring it up?” Trey asks the lazy dog.

He says it jokingly, not expecting the pup to actually follow through. But Jonsi looks up after hearing his name. He rests for a moment, pondering whether or not he should listen. Then, he finally gets up off the couch and goes straight for the sock. This smart dog clearly understood what his dad asked him to do!

Jonsi carefully grabs the sock and walks up the stairs with it. Off screen, he brings the sock to his dad. Even though you can’t see it, the tone in Trey’s voice clearly indicates that he was in shock. He never thought that Jonsi would listen so well, especially without being trained to do it.

“Oh! Oh my god, he did it!” Trey shouts from upstairs.

After Jonsi’s parents posted the video on social media, it quickly gained popularity. Viewers were amazed, and many were left wishing that their dogs would help out around the house like Jonsi.

Jonsi’s mom, Gabbie Foote, posted the video on her YouTube channel. After finding out Jonsi had gone viral on social media, she posted a follow-up video for Trey and Jonsi’s birthday. In that video, she explains how excited she is that her youngest pup got his chance in the spotlight.

“Jonsi and Trey are FAMOUS! Guys what the heck is going on??” wrote Foote. “We caught some hilarious footage from our security camera and I had to share it.”

Next time you need some assistance with chores, why not ask your dog for help? They might surprise you like Jonsi did!