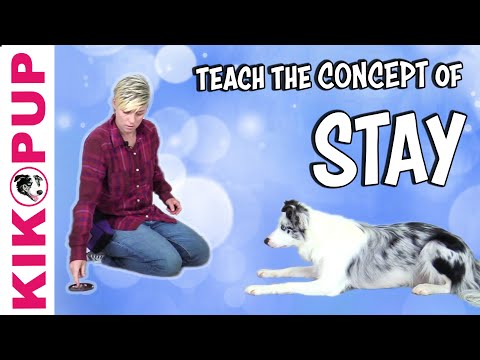 A game to teach the concept of stay until the release cue is given.

This game is for those of you who ask their dog to sit stay and then after a few seconds the dog seems confused and either gets up or starts offering other behaviors he thinks might work. Often times dogs get up from a stay position because they do not quite yet grasp the concept that they should remain in position until they hear the release cue. Sometimes the learner can interpret no information as being wrong and so will start to change their behavior to see what might work. This very simple game teaches dogs the concept of waiting until the release is given.

You can also practice this game using toys as the reinforcer that the dog is released to.

I don’t suggest playing this game with your dog’s dinner as it can cause your dog to eat faster than he normally would if the bowl was calmly put down in front of him while he was relaxed. Also the reason this game works, is because the dog is getting a high level of reinforcement while waiting to be released. If you just put something down and the dog only gets reinforced when he gets up to get it, as you can imagine it can cause the dog to get excited or over-aroused while waiting to finally be released.