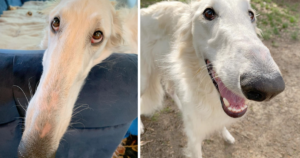 Get ready for the snootiest of all the snoots you’ve ever seen! A dog in Virginia possesses possibly the world’s longest doggie nose. To be more precise, Eris’ snout measures about 12.2 inches long. Her family speculates that her snout breaks all the records, but have yet to have that officially verified.

Eris’ namesake is the Greek goddess of strife and discord. She’s a Borzoi, a breed known for their long noses. Still, this one certainly stands out among the rest! These sighthounds hail from Russia and were originally bred to hunt wildlife, including wolves. They also have a bit of Greyhound in their history; They’re runners too.

Fortunately, Eris’ foot-long nose causes her no medical issues. It has also earned her a bit of internet fame!

The couple instantly fell in love with Eris as she walked right over and sat on their laps. They were wary about potential issues arising from a long nose, but as it turns out Eris experiences no discomfort.

“We were warned when she was a puppy that she may be having dental issues, where the teeth would poke into the gums and she may have needed canines removed. But she just sort of grew past it. There are no issues from her long nose, she drops food everywhere but so do I.”

Of course, there are also benefits to having such a long snoot.

“She is very good at sticking her nose into very small gaps between couches, fences, or people enjoying a meal at a table – so certainly her pointed nose is advantageous there.”

With a striking look like this, Eris very quickly became a star. People everywhere want to meet her,  Kambourian said.

“We get stopped a lot when we are walking Eris because most people are trying to figure out what breed she is, but we’ve started finding paths through the neighborhood where we can actually get a walk done.”

Usually, Eris loves the attention, but you’ll never hear her bark about it.

“She is so happy to see people and other dogs, but can get very skittish around very small dogs. Sometimes she gets grumpy but it is so goofy and lovely because Borzoi are very quiet. I don’t think we’ve heard her actually bark.”

Eris, or as she is named on Instagram “Madam Eris Overbite, Queen of Snoots,” has over 178,000 followers now. Though the couple didn’t intend for their dog to become famous, it was bound to happen.

“While we just started the page as a scrapbook, we’ve come to love being a part of the Instagram dog community. It is so friendly, and we’re really thrilled to be a part of it.”

Follow her majesty, the Queen of Snoots herself here!